Photo-of-the-Week #213 The Queen and the Heir Apparent, Badlands National Park, South Dakota, May 2015 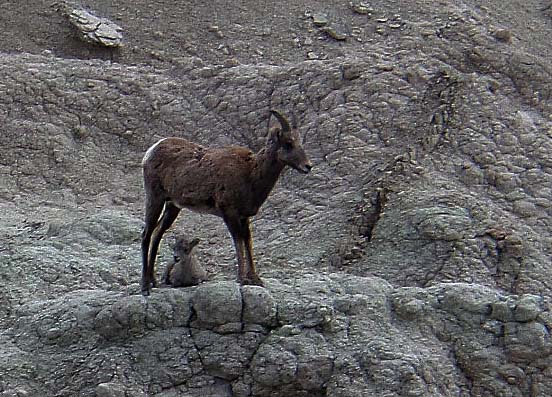 Here she is, the Queen Big Horn Sheep and her Heir Apparent perched high on her rocky throne in Badlands National Park in my "home" state of South Dakota.

Of course, I don't know if she is the "official" queen, but she certainly looked like royalty on this rocky precipice with her young one resting right below its mother. I can't tell if the young one was a prince or princess. I took this shot from probably about two-tenths of a mile away.

My little camera continues to amaze me, as does Photoshop. The female big horn sheep and her little one were only a small part of a larger photo of the mountain. With the help of Photoshop I was able to crop the photo to capture just the two animals and enhance them a bit so you could get a good glimpse of them.

Big horn sheep wander around the Badlands freely. During my last trip I parked next to a big horn female, got out and took photos while she was grazing. Capturing wildlife is a bit more challenging than shooting landscapes. If you've had the opportunity to shoot photos of wildlife you know what I mean.

This was the only wildlife I saw on this visit to the Badlands. But, I'm glad I had to opportunity to catch this one. I hope you enjoy it, too.
Posted by Ed Helvey at 12:42 AM No comments: 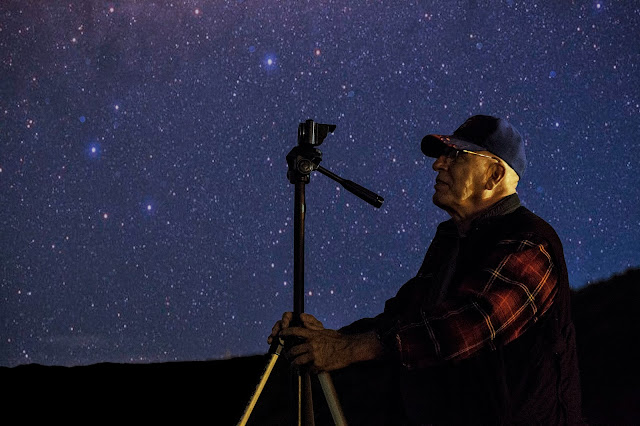 This week's photo features an amazing starry sky and . . . well . . . me. Yes! I usually don't include me in the photos of the week, but this photo is amazing, at least in my humble opinion.

The back story; the photo was taken by my youngest (youngest being relative, it would take me a whole page or more to list his life, travel and photo experiences) former brother-in-law. I've known Don Stephanian since he was 10 years old. He's now - well, under 50. That means a lot of years have passed.

Don and his pretty as a picture (and Don takes pretty pictures) wife, Michelle, and my niece, Sydney, and nephew, Garrett, hosted me at their home for a few days a week or so ago. I had a wonderful time with them all.

One night, Don said, let's go out and shoot some night photography. Wow! What a neat invitation. I've admired Don's photos from around the world for years. I'd rank Don's photo's with the best National Geographic photos. Don is probably blushing right now, but it's true and I've been in the media business for a lot of years.

So, off we went to an abandoned excavation site in a section of Issaquah, Washington where there was both some extremely dark sky and some light in one direction from an area that had been developed. Very little of the light influenced the dark sky we were focusing on.

This was a great chance for me to experiment with my simple (by today's standards) Samsung point and shoot camera. Don gave me some hints on how to capture some interesting time exposures with my little camera using the manual settings. Now, I wouldn't compare my photos with anything Don shot and I certainly wouldn't begin to compare them to anything even approaching professional.

While I was experimenting, learning and playing, Don selected me as a subject with the Starry, Starry Sky behind me as a backdrop. Now, I'll be honest, I couldn't see even 1% of the stars in this photo with my naked eye. Don's expertise and knowledge of his camera was able to capture this photo and when I saw that backdrop I was blown away. There was no lighting used for this photo. It was shot strictly with existing light and the correct lens aperture and time exposure. Yes! I knew he was taking the photo because I had to stand perfectly still during the several seconds of the time exposure. Don passed the photos by me on the LCD screen on the back of his camera. I couldn't see the starry blanket even on his camera.

But, when he sent me this, it blew me away. So, you're getting the first exposure (no pun intended) of what is going to become my new profile picture on my various sites. Your comments are solicited.
Posted by Ed Helvey at 12:34 AM 6 comments: 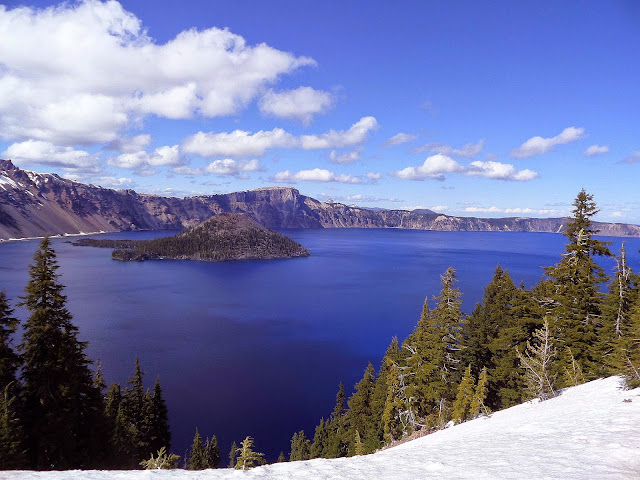 No matter what mankind does, in my opinion, we can never outdo nature!

Here I am, finally, at Crater Lake in Oregon. Crater Lake is a national park. There is just not much to say about Crater Lake except - AWESOME! I have wanted to visit Crater Lake at least a couple times in the past, but the weather/environment prevented it.

While Crater Lake isn't the highest mountain and peak in this region, it is still up at about 7,200 feet above sea level. The lake is 1,943 feet deep at it's deepest point. Wizard Island, is, as is obvious, considerably higher than the water. I believe the top of the volcano (inside a volcano) cone on Wizard Island is about 300 fee above the water. The water is the clearest water in the world with visibility down to 108 feet. It's also the deepest blue color you can imagine. And, ALL of the water in the lake is only an accumulation of rain fall and snow melt. There are no springs or streams feeding the lake inside the crater.

It was quite brisk on the mountain, as you can see, in the photo, there is still a lot of snow on the ground up there and the lodge hadn't opened for the season, yet. It's on my list for another visit in the future. If you've never been there, it's well worth putting on your Life List.

Just another awesome day in the life of a living free, nomadic vagabond.
Posted by Ed Helvey at 5:31 PM 4 comments: 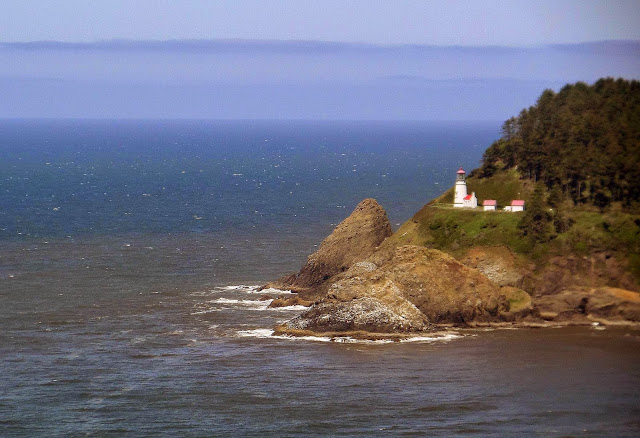 What an awesome week of trekking and exploring it has been. I captured this lighthouse photo along the rugged Oregon Pacific coast. I was traveling north from Coos Bay, Oregon to the small town of Otis, Oregon where I turned northeast toward Portland and my destination just outside the small and pretty city of Newberg, Oregon for a few days to visit another friend from my Air Force days.

This lighthouse was only one of several I saw along my route. Actually, it's one of many lighthouses along the coast. Being from the east I'm more attuned to the Atlantic coast that is generally not near as rugged until you get north towards the Maine and Canadian shoreline. I have spent about seven days in Oregon as I write this narrative for this week's photo. To say that my experience in Oregon, so far, has been awesome would be an understatement.

I've been through Oregon before (the operative word being 'through'), but this time I have been to Crater Lake (more to follow on this) and through parts of the beautiful, lush mountains and valleys of the Cascade Mountain Range. I've seen numerous volcanoes, waterfalls, a gorge, quaint and pretty towns and villages and areas where it seemed like there were very few human inhabitants.

And speaking of the human inhabitants, I've met so many diverse, terrific, warm and friendly people. And, that's not to mention the diversity of places they migrated from, including numerous from my home state of New Jersey.

I selected this week's photo because, to me, it depicts the majesty of the mountains and forests that come right to the edge of the Pacific Ocean, the ruggedness of the coastline, the vastness of the Pacific Ocean and the tiny, yet significant presence of humanity in the form of the lighthouse. It's another portrait of the beauty and richness of the continent U.S. citizens call home, while, at the same time, illustrating how small we are in comparison to all that nature provides.

Every state I visit has unique and interesting characteristics and qualities. I'm often asked what place or sight I've experienced, so far, is my favorite. My only honest answer is, "All of them." I know, that seems non-committal and evasive. The reality is, there are places that attract me enough to leave me wanting more and with plans to return. However, I still have to travel through other parts of this land to reach the places I will return to. I always discover new, interesting, often awesome and frequently exciting people, places and things as I travel to my intended destination. How great is living free?
Posted by Ed Helvey at 2:27 PM 4 comments: This is one of those shots that just . . . happened. I was cruising along at Dusk on my way to Yucca Valley, California, my stopover destination between Lake Havasu City, Arizona and Hawthorne (L.A.) California.

I never know when one of these shots will turn out, but I was driving along this California highway, I believe it was Rt. 62, with my camera resting on the steering wheel. Fortunately, before leaving Lake Havasu City, I had cleaned the windshield when I topped off my fuel. There were a number of dramatic shots as I drove along including what appeared to be a very large, dark storm cloud to my right (north) over a mountain range. It was only a few miles from where I eventually passed. There appeared to be heavy rain falling and some exciting lightning bolts. Unfortunately, I wasn't able to capture any lightning.

This shot happened at just the perfect time. The contrasts of the clouds, sun setting behind the clouds, though mountains and the starkness of the desert have a raw beauty that will always remind me of this drive. Nature is awesome.

Just a few moments before I sat down to compose this article to accompany the photo, my friend, BJ, and I were talking and she said with high definition TV as good as it is today, there's really no need to go to all these beautiful places, you can witness them on TV. I begged to differ. You may be able to see the beauty on a HDTV screen, but it will never be able to take your breath away like it does when you experience something like this in person.
Posted by Ed Helvey at 6:00 AM No comments: