Imagine waking up to or returning to this kind of view. I spent an evening and morning visiting my friend, Dan Poynter, just outside Santa Barbara, California and this is and has been Dan's view for the last 40 years. I actually took the top photo from Dan's living room. He has the same view from his bedroom. And, yes, that is the Pacific Ocean.

But, this is not the only view from Dan's pad. In fact, Dan has a 360 degree view from his foothill vantage point. To the left of this view Dan overlooks Goleta, California and further south is the actual city of Santa Barbara. To the north are views of farms and forested lands. To the rear are mountain vistas that separate the coastal area of California from the central valley.

It is understated to say this view is breathtaking. I thought the views from my lake front, mountain top and ranch homes were amazing (and, they actually were, but not even a close second to Dan's views). My buddy, Dudley, and his wife, Muffet, have gorgeous views from their vantage point at about 3,500 feet on a mountain top in western North Carolina near the Blue Ridge Parkway. Their views do hold a close second to Dan's. But, imagine this view everyday of your life when you're not traveling somewhere in the world, as Dan has done for the past 40 years. 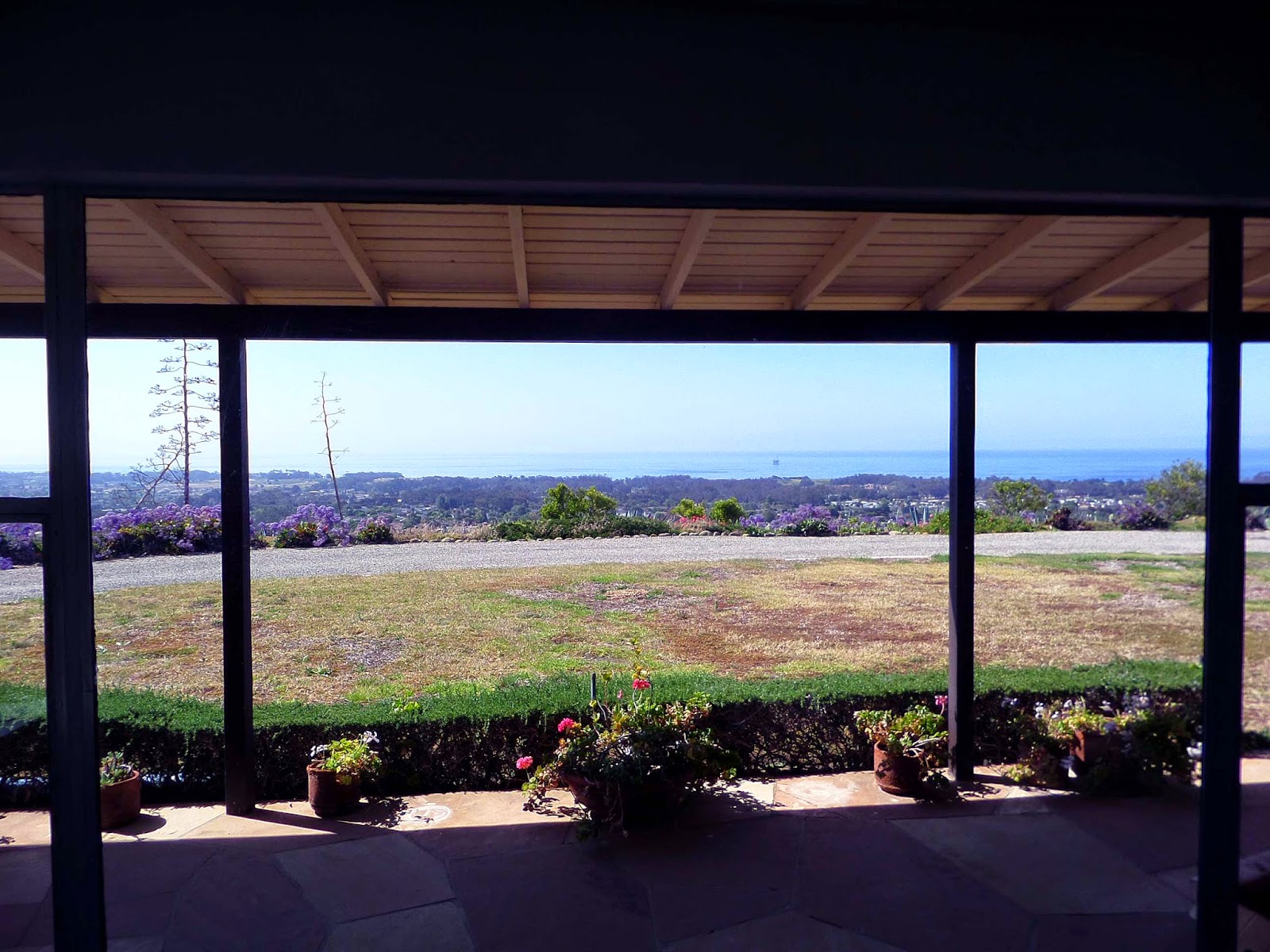 This photo was taken while stepping back a little further and using a wider angle lens. You can see there is a covered patio in front of the ceiling to floor window that must be 10' or 12' wide. You can also see the ends of the main pain of glass on the extreme right and left of the photo. 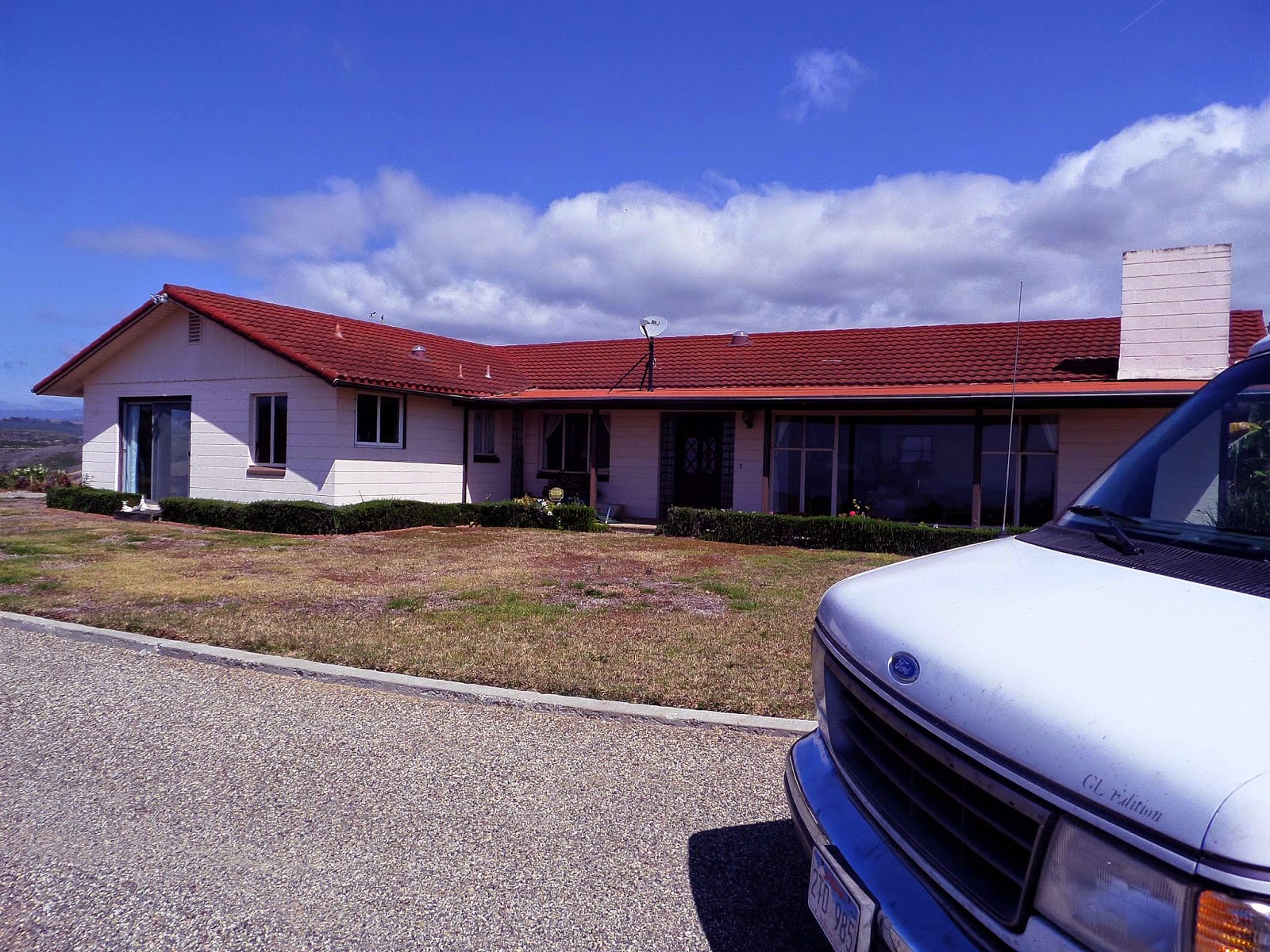 This photo shows the front of Dan's home and a reverse shot of that grand window. Dan's bedroom is to the left side of the house with the sliding glass door overlooking the view. And, there is the nose of My McVansion sneaking into the shot. 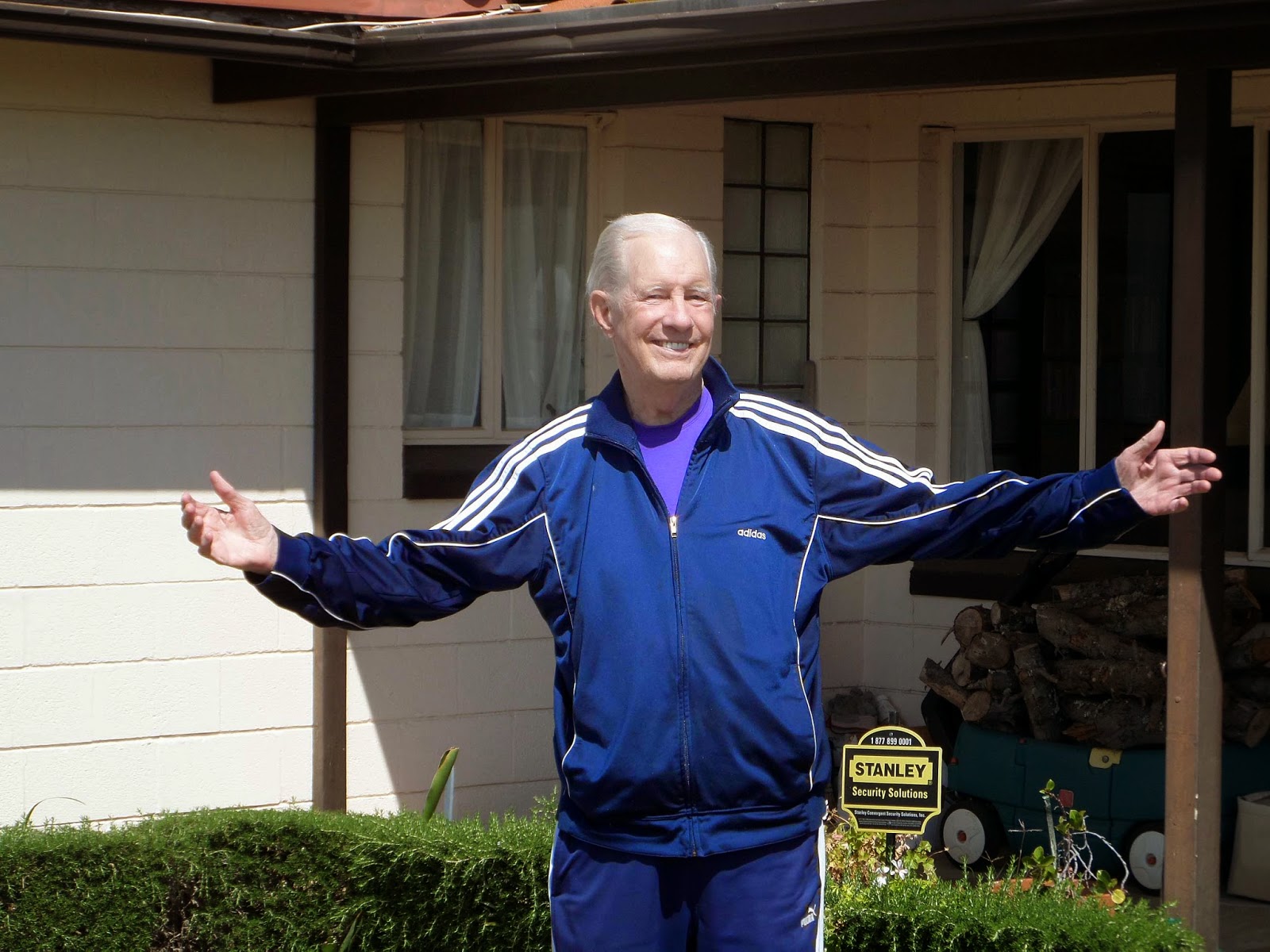 Here is the proud "King of the Mountain," himself, my friend, Dan Poynter. Dan is, in mine and the opinion of so many people I know, the "Guru of Self-Publishing." Dan is the author of at least 133 books including the iconic and definitive two volume Dan Poynter's Self-Publishing Manual: How to Write, Print and Sell Your Own Book

, now in its 16th edition. He operates his publishing house, Para Publishing, LLC, from his lofty kingdom.

I live an extraordinary life. I have so many fascinating friends and continue to meet so many new interesting and fascinating friends from all walks of life as I travel. Whether they live in homes and locations like Dan's or live in vans, utility trailers of full-size RV's and everything between, I am so privileged to meet and visit with them as I live and travel freely from coast to coast.

(Disclaimer: Any purchase made by clicking through a link on this blog will result in Ed Helvey receiving a modest commission from the vendor. The purchaser will pay the same price regardless of whether you use my link or go directly to the vendor. Thank you for your support, it is very much appreciated.)

Photo of the Week #207 Oasis in the Sonoran Desert, Winterhaven, California, April 2015 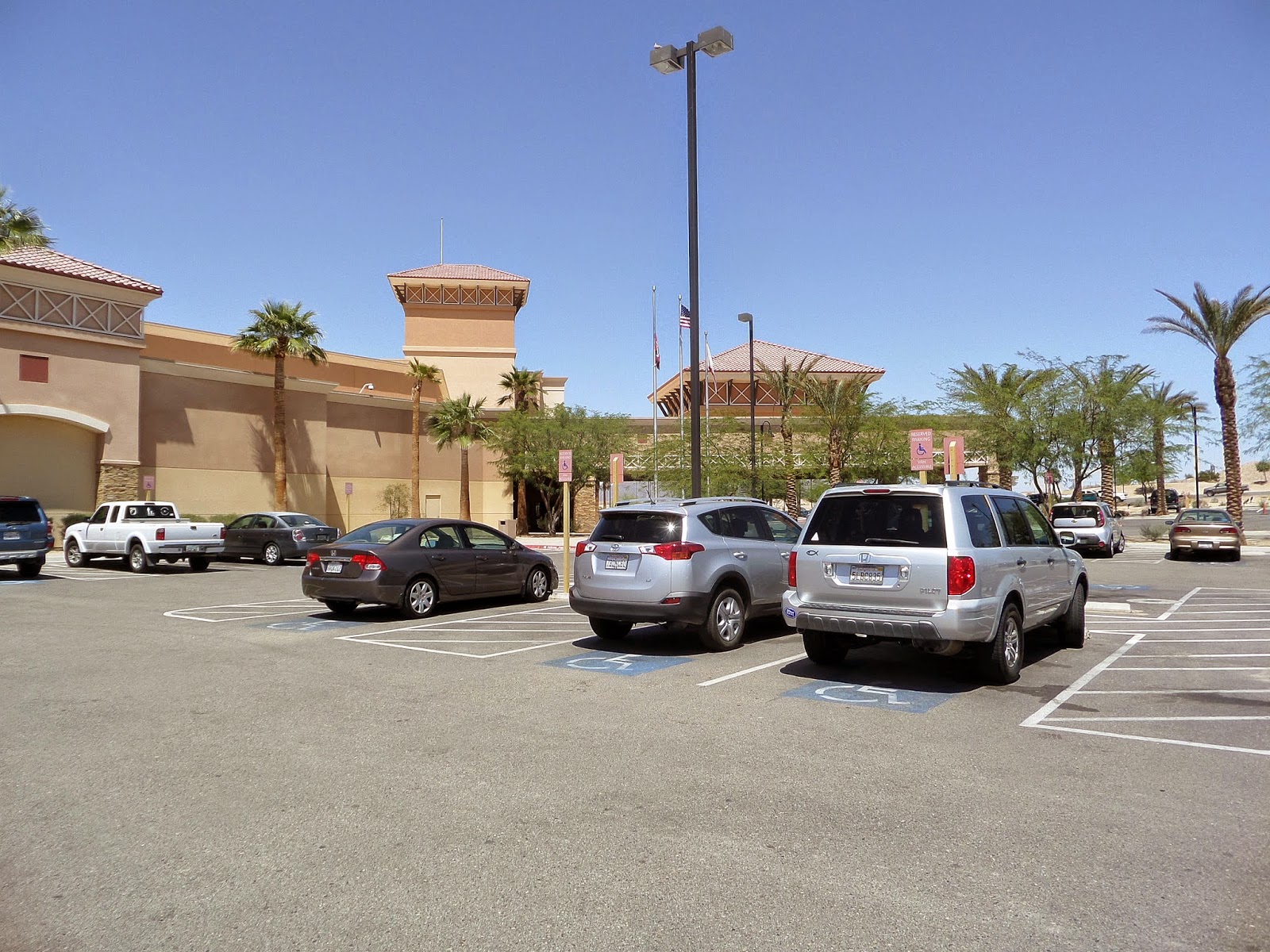 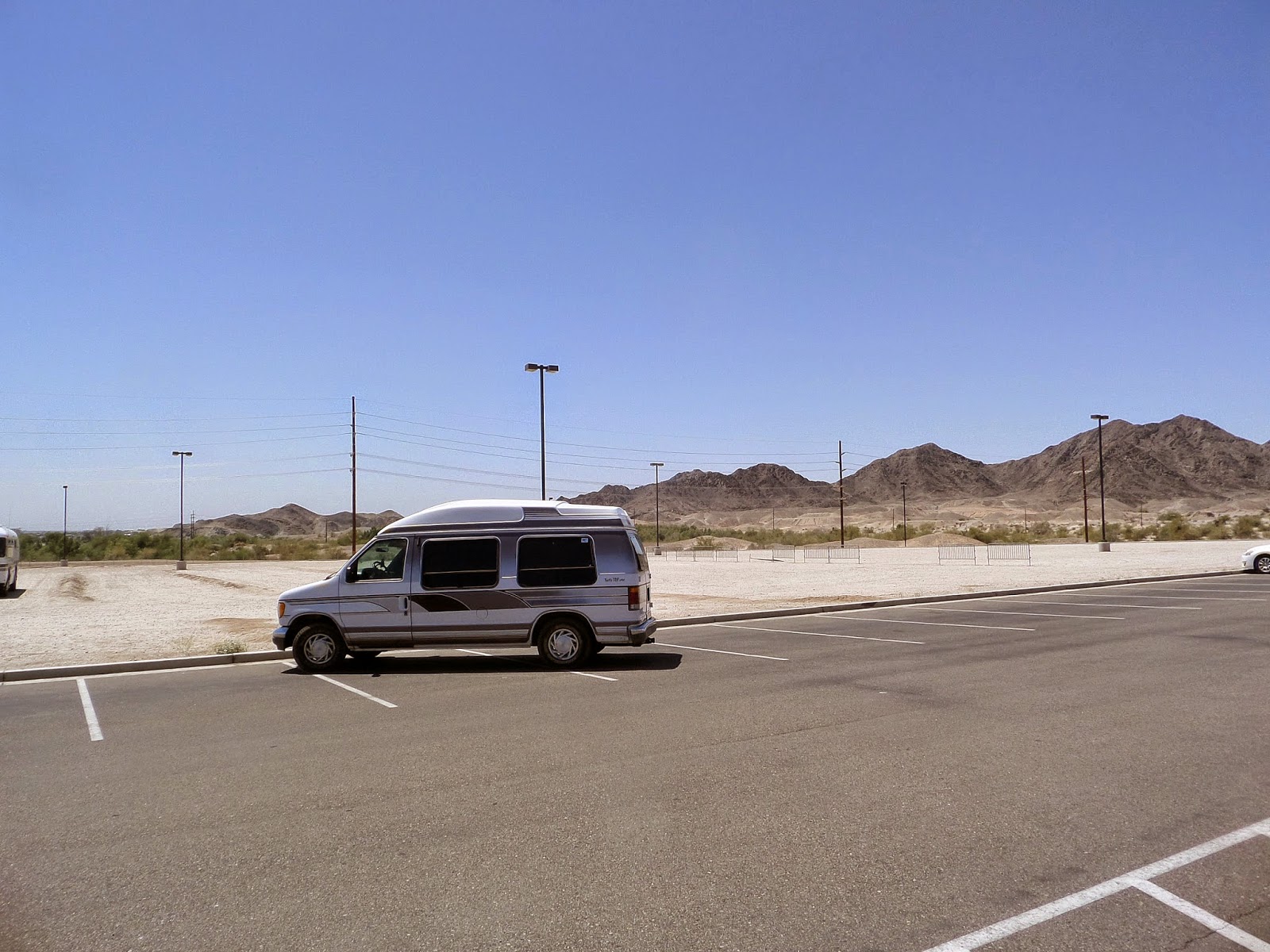 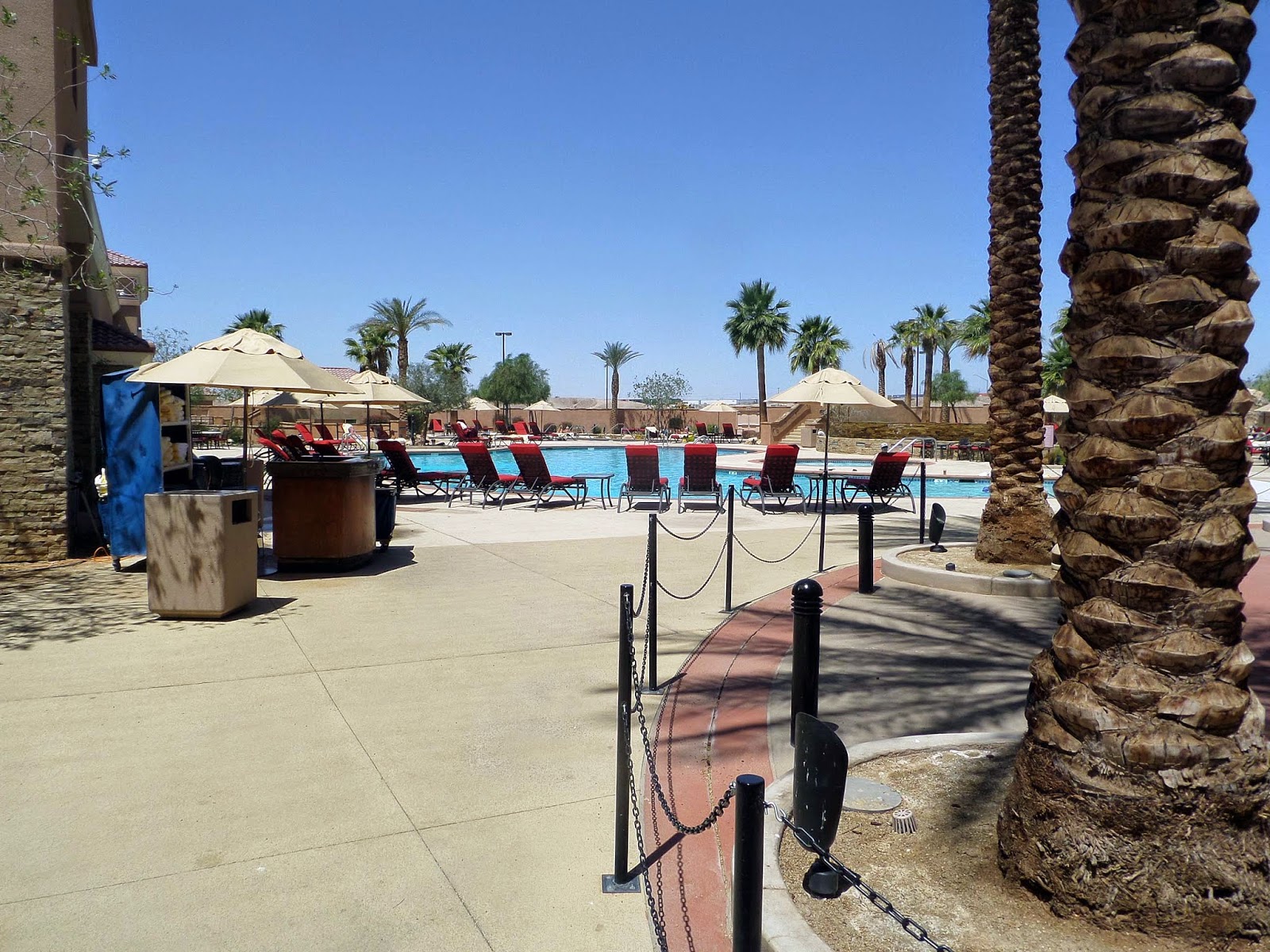 I have been staying at what can literally be called a manmade oasis. It's the Quechan Indian Tribe Casino and Resort Hotel, also known as "The Q," in Winterhaven, California, directly across the border (Colorado, River) from Yuma, Arizona.

The three photos show the architecture of the hotel and casino (there is also a well equipped conference and function center, too). It gives me the general impression of a Spanish/Moorish style. The property is pretty new, probably only a few years old.

As you can see from the photos, it literally is in the middle of a pretty desolate Sonoran desert region about 1 1/2 miles from the Mexican border and the small town of Los Algodones. Thousands of U.S. and Canadian visitors go to Algodones (including yours truly) to high quality, low cost dental work. There are in excess of 250 dentists in this little town. I'm very pleased with the work I had done and even happier with what it cost me.

Inside "The Q" is a very large and well equipped, modern casino, nice restaurants, a night club and a beautiful pool complex. And it's all located in the middle of the desert. It has become a ghost town through the middle of April and will likely continue like this until sometime in later October when the "snowbirds" will return for the winter.

Photo-of-the-Week #206 The Desert in the Mazatzal Mountains, Arizona, April 2015 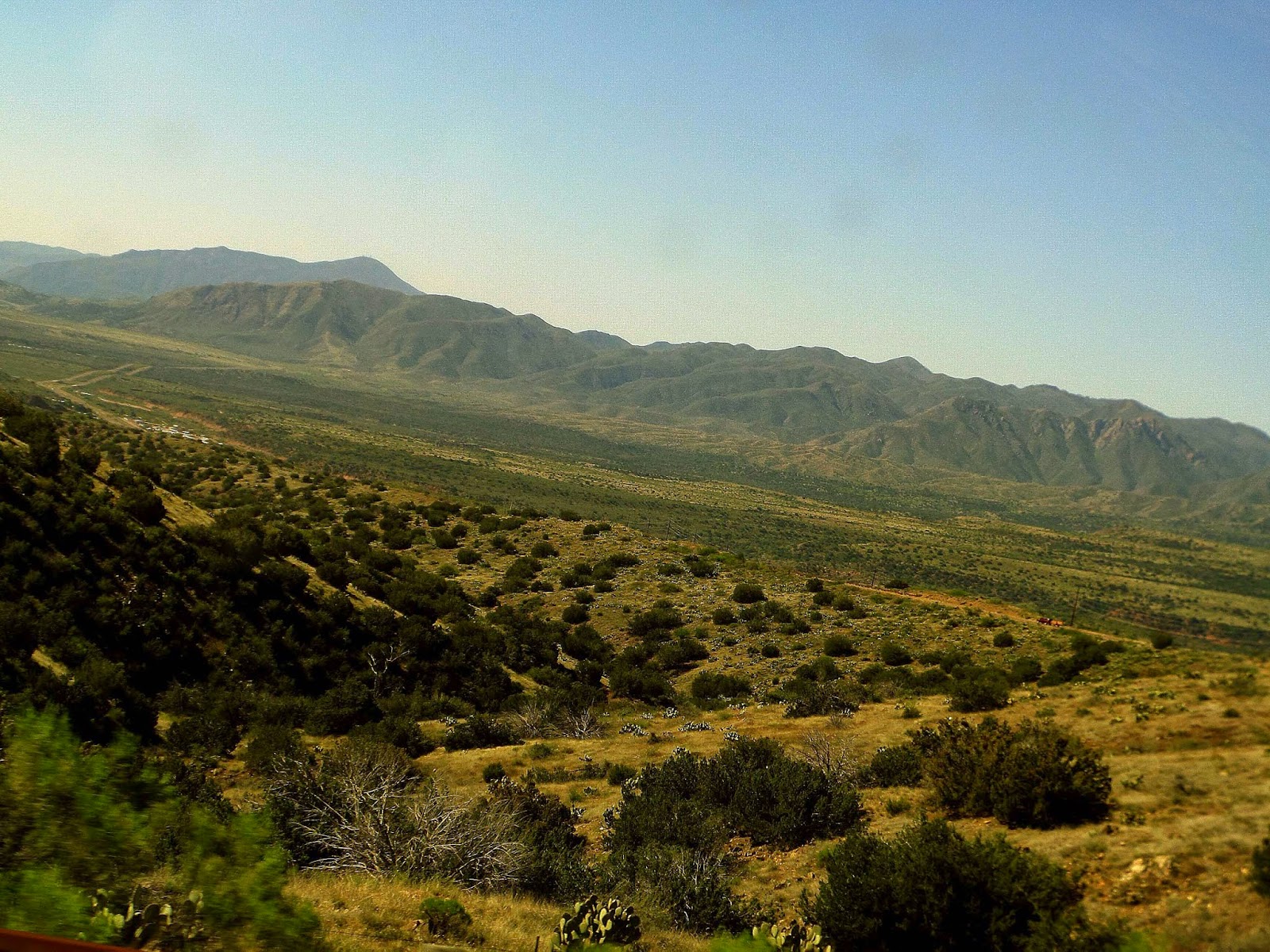 What's to say? There is nothing more majestic than Nature's work. The desert and mountains of Arizona are a perfect example. I took this photo while traveling between Payson and Phoenix, Arizona. It was a beautiful drive.

Photos like this one are serendipitous. I shoot them from My McVansion while I'm driving. I set the camera and the zoom and aim it in the general direction I want to capture a photo. I shoot numerous shots and hope to capture one useable photo. Most of the time I am reasonably successful, as with this photo.

I've been to the southwest numerous times over the years, so I'm familiar with some of the terrain. I find the desert to be a very interesting environment. I've been in southern Arizona many times during the late spring and summer. I know it is hot, very HOT, during the days. I've only been through parts of the northern region of the state once. It's quite different up there. I've also learned that there is a several degree difference in temperatures between the lower desert areas and the higher mountain areas. So, as a mobile vagabond, one knows to go to the lower altitudes during the winter and up high in the mountain country during the summer.

Apparently a lot of people like the climate out here in Arizona. When I made my first trip to Phoenix in 1981 it was during the summer, the temperature reached 115 degrees at the Biltmore Hotel and there was an estimated population of 1.5 million people in the metro area. Apparently, the summer temperatures still reach around 115, but currently the metro area population is 4.5 million. Way too many people for me, but I guess there are a lot of people who like the region enough to endure the extreme heat. It's like upper New York State and other northern states only in reverse. The temperatures are sub-zero during the winter, but there are still a lot of people who live and thrive there.
Posted by Ed Helvey at 12:15 AM No comments: 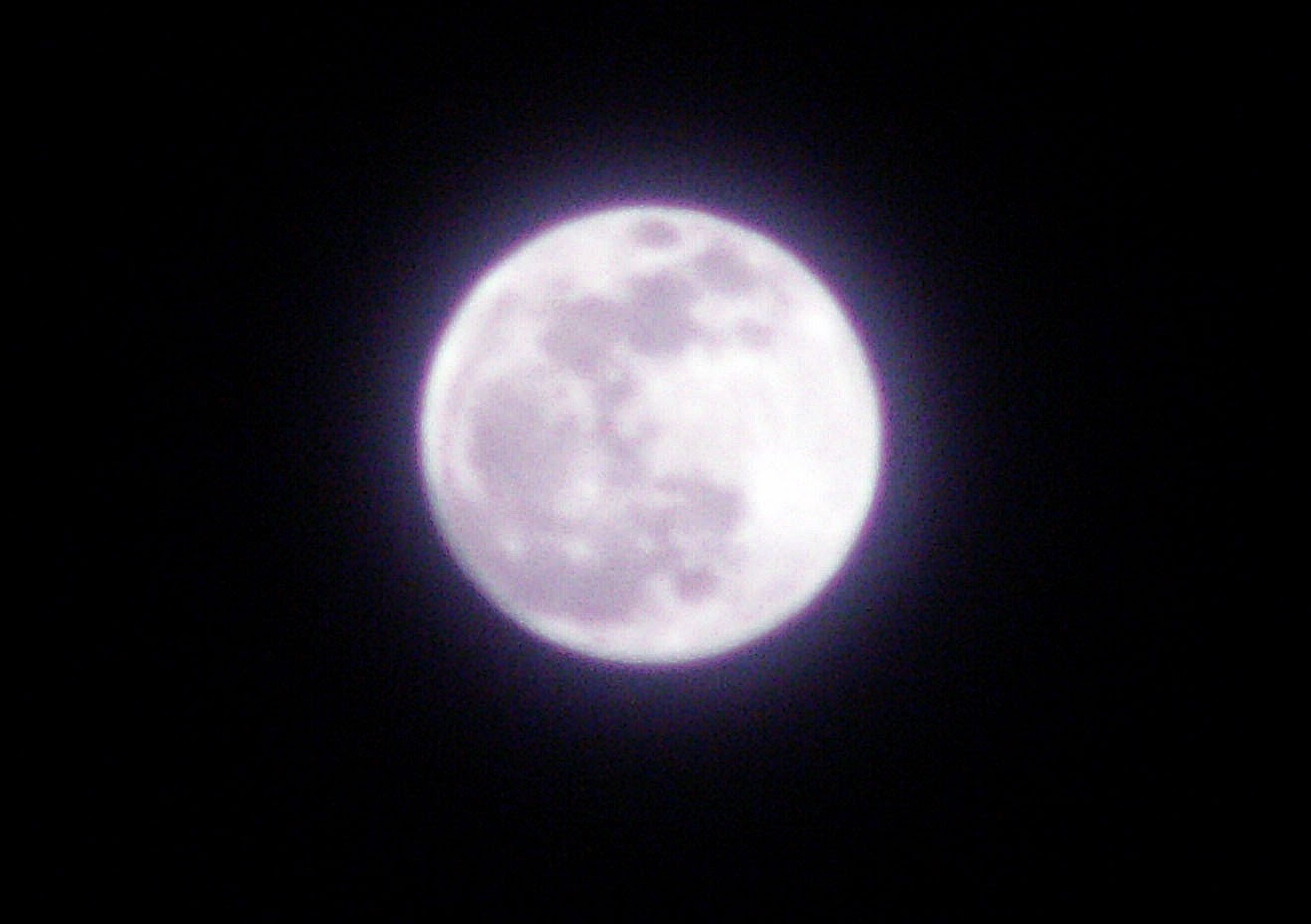 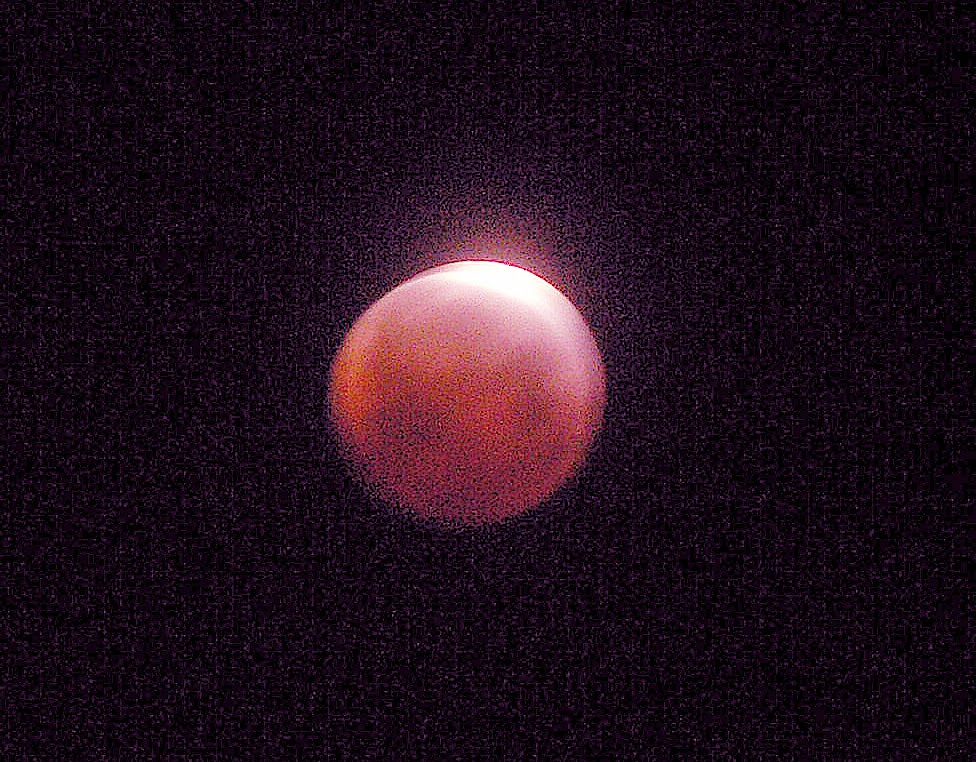 I'll be very honest, these photos are definitely not "National Geographic" or "Scientific American" quality. First, I don't have the kind of sophisticated photographic equipment for this kind of photography. Second, the idea of capturing these photos was on the spur of the moment. I was experimenting in the dark of night. And, third, I take photos to document my experiences not to emulate the "National Geographic" or "Scientific American" pros.

A Blood Moon is caused by a total lunar eclipse. This particular Blood Moon was the third in a series of four within 18 months. This series of four eclipses, six months apart, is called a tetrad. There will be a total of eight tetrads between 2000 and 2100. This is the second tetrad of the century. The moon will typically look orange or red and is caused by the rays of sunlight bending around the Earth, which is between the sun and the moon. The color is caused as the sunlight bends through the Earth's atmosphere.

I took these photos from about 5,000 feet above sea level from my camping location in Tonto National Park near Payson, Arizona. The sky was remarkably clear. The first photo of the full, bright moon was taken in the eastern sky at about 9 PM on Friday night, April 3rd. The Blood Moon, lunar eclipse, photo was taken in the southern sky through a hole in the pine trees at about 5 AM April 4th when the eclipse was just about at it's fullest. It was about 40 degrees at 5 AM. I watched and shot photos for about 40 minutes.

The bright, full moon was easier to photograph because there was lots of light. It was almost bright enough to read comfortably. The Blood Moon was much harder to photograph because it was much darker than the bright full moon. Remember, the Blood Moon had no direct sunlight reflecting from it. It was totally in the shadow of the Earth and the only light reflecting from it was coming around the edges of the Earth through the atmosphere.

The camera (and I experimented with both of my digital cameras) was tripod mounted for stability. Obviously, I needed a wide lens opening and it required a time exposure to capture enough light to provide a credible image. I could use a remote shutter release via bluetooth from my smart phone with one of my cameras. Unfortunately, I couldn't get a credible image from that camera.

I don't have a way to remotely the shutter with the camera I used, so I had to actually have my hands on the camera to hold the shutter release down. Thus, it's apparent there was some slight, but evident movement of the camera during the exposure, especially on Blood Moon photo. I used Photoshop to sharpen the Blood Moon image a little before too much pixelization was apparent. But, then again, as stated earlier, this is documentation of an experience and not for publication in a major magazine.