I shot this photo while the rented mini-van I was driving was rolling up the road toward the Red Rock Country and Sedona, Arizona. This was my first (and so far, only) visit to the "small" artist community about 110 miles north and, about a two-hour drive from Phoenix. My mental impression of Sedona had always been of a small hamlet in a valley made up of red rock mountains. I pictured small, low to the ground, adobe cottages inhabited by a community of artists who painted, threw and decorated pots, sculpted, composed music, wrote books and other similar artistic endeavors with a small population of folks to operated retail establishments and support services for such a community.

Of course, from this approach (driving in from Cottonwood, a community about 19 miles south of Sedona, a 25 minute drive), I became immediately disillusioned. First, of course, I could see that the small city was spread out over a sizeable piece of geography. The actual city area of Sedona is about 18 square miles. The significant number of signs identifying various civic groups that were present in Sedona was also a quick giveaway that what I was soon to experience was nothing like my mental picture. I also learned that Sedona is about 4,500 feet above sea level in the high desert and I was expecting it to be at a much lower elevation in some kind of "bowl" surrounded by mountains. Actually, from the vantage point of the motel I decided to stay at in Cottonwood (I didn't have My McVansion at this time), Sedona appeared to be much lower than Cottonwood. In fact, I guess the desert can be deceiving, because Cottonwood was actually about 1,200 feet lower than Sedona.

When I finally arrived in Sedona, my mental picture was dashed. I found a small city of about 10,000 people (about 1,300 less than Cottonwood). While the houses were generally low, they really didn't resemble the small, adobe cottages I envisioned. But, I guess the thing that really took the wind out of my sails was that it appeared to be a pricey tourist trap. I didn't see any quaint evidence of the artist community I imagined. There were numerous strip malls, restaurants of all descriptions including a sizeable number of upscale restaurants, a variety of better known, mid range to high priced hotels and along with the general retail and support stores and services, there were lots of places to help reduce the amount of cash one had by replacing it with pricey "stuff." At the north end of Sedona there was a very upscale, Spanish architecture, walled mall. It was lovely, but certainly not what I was looking for. In general, I could easily ascertain that Sedona was a much more costly place to both visit and live than near by Cottonwood.

So, in doing a little research, I guess what I was really expecting was a 1970 type Sedona when the population was about 2,000 and not a 2010 Sedona with a little over 10,000. That was an average increase in population of about 2,000 more residents every decade since 1970. The mental picture I had been carrying around in my mind since around the mid 70's is what I would have likely found if I had visited Sedona back in the day. While I enjoyed my visit to Sedona (I was there attending a workshop) and I enjoyed exploring some of the region and seeing the geographic features of the region, it's not a place I'm anxious to return to just to visit and hang out. And frankly, I stayed at a nice, budget motel in Cottonwood for about $100.00 per night LESS than it would have cost me to stay in the Hampton Inn in Sedona. That was about a $300.00 savings and I can guarantee it didn't cost $300.00 to make the 38 mile round trip to Cottonwood each day for three days.
Posted by Ed Helvey at 1:54 PM No comments: 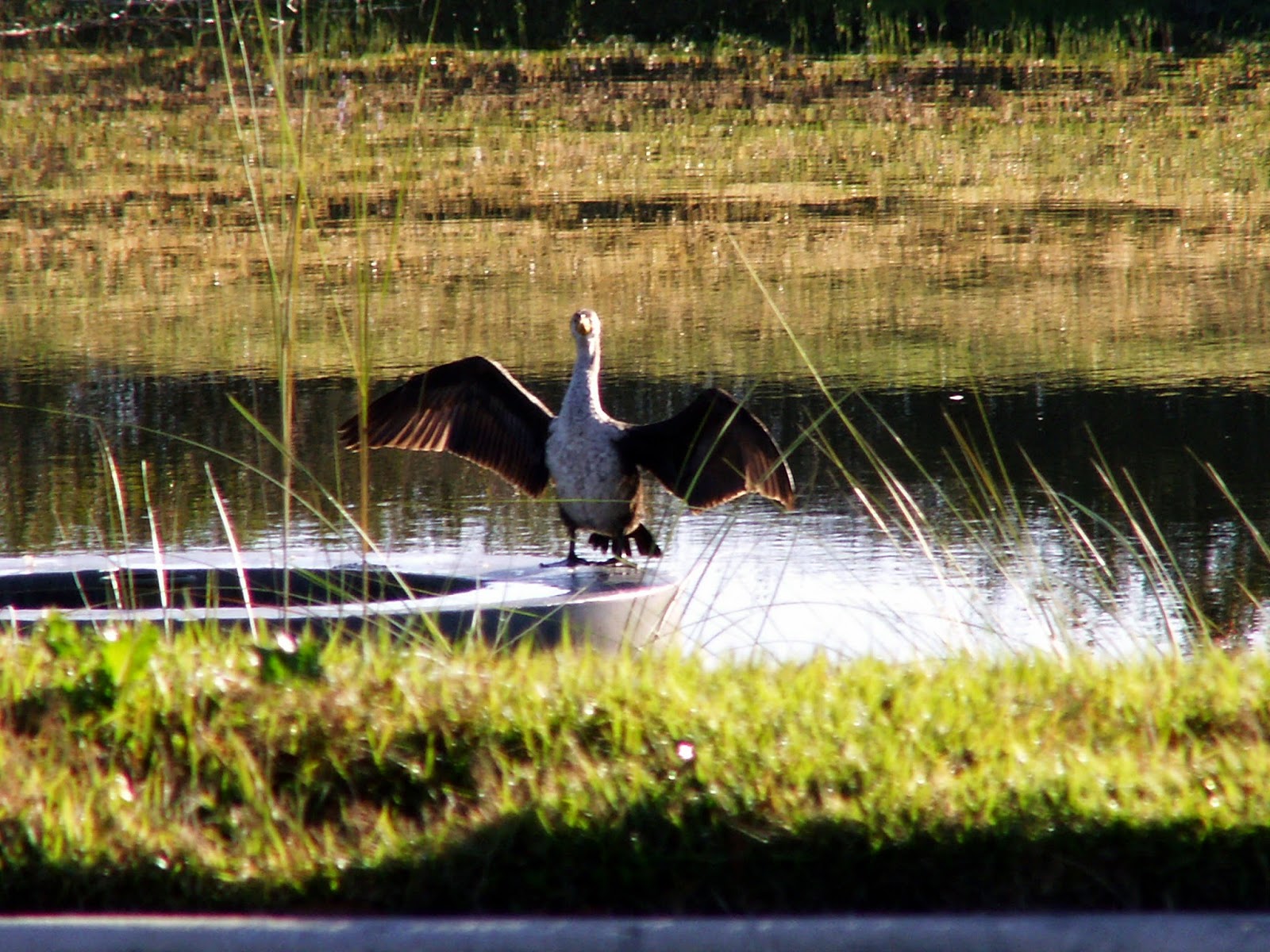 Here is the H.L. Hunley, the first combat submarine used to sink a ship in battle. The Hunley, with a crew of 8, sunk three times losing a total of 21 crewmembers. It had only a single successful mission before sinking the final time with its crew and being lost in 1864 during the Civil War.

The Hunley was part of the Confederate Navy and had a short career as a battle vessel. Reportedly, the Hunley wasn't able to put enough distance between itself and the U.S.S. Housatonic, the U.S. Navy ship it sank. It became a casualty of war from the same explosion that sunk the Union ship.

The Hunley was finally located in 1995, 131 years after it sank. It was recovered in 2000, restored to some degree and preserved. It is now on permanent display outside the entrance of the Charleston Museum.

The H.L. Hunley was built in Alabama and moved by train to Charleston, but the battle that ultimately sunk it for the final time was outside Charleston while sinking one of the Union Navy ships blockading the Charleston Harbor. So, it's only fitting that this artifact from one of the darkest times in U.S. history should be displayed in perpetuity in Charleston.

While I am not particularly a Civil War buff, I continue to learn more and more about this event that, for some reason, either wasn't in the history books I read during high school and college or I overlooked. Frankly, while admitting to being less than a scholarly history student, I'm sure most of what I didn't learn through the required, formal history courses I took during my education did not include the vast amount of information I'm learning as I travel the country.

My knowledge of submarine development, since I am a native of Clifton, New Jersey, was that of John Holland in the 1870's. Much of the development was done in Paterson, New Jersey, the city just north of Clifton, both of which share the Passaic River. After visiting Charleston, I now know the Confederate Navy was a bit ahead of the U.S. Navy in this regard.
Posted by Ed Helvey at 1:54 PM No comments:

This photo is the first Photo-of-the-Week of the third year of this series. The previous 156 photos were posted on my main Living Free blog. Eventually, I'll have an archival index on this site that will allow you to look back at the first three years. But, that will take a bit of time, so for now, you can just go to the Living Free blog and check the archives there if you'd like to look up any past Photos-of-the-Week.

Herb's Limestone Country Club is located in Limestone Florida not too far from Arcadia. My friend, Tommy, a former vandweller, boatdweller and a current biker and housedweller with a 22' Winnebago motorhome from Port Charlotte, Florida, brought me to this exotic location. Herb's Limestone Country Club is one of numerous "biker bars" located all over the state of Florida. There is a special kind of ambiance in places like this.

In this photo you can see a couple bikers getting ready to roll up the road. They were a husband and wife, from Michigan, I believe. Yes! They are bikers, but bikers come in all sizes, shapes, forms, colors and from a variety of backgrounds. While biker bars like the Limestone Country Club have a stable of regular locals, they also cater to the traveling bikers who may be doctors, dentists, lawyers, IT professionals; well, you name it. The folks I met at this biker bar and another one we visited on this overcast Sunday afternoon were all very friendly and jovial as were the women (in both places) who were minding the store. I guess the common denominator is that these places mainly cater to the biker crowd. Yet, each has its own unique persona. Blues, jazz, barbecue and beer seem to be typical to many of the biker bars. While there is usually music playing in the background, live music of the blues, country, bluegrass genres (and probably some jazz) seem to be an important part of this scene at night and on weekends.

I hope to revisit this biker bar with my friend Tommy and perhaps others that he knows of and frequents. Oh yeah, the best part for me is always observing and getting to know some of the interesting people who pass through.
Posted by Ed Helvey at 12:54 PM No comments: