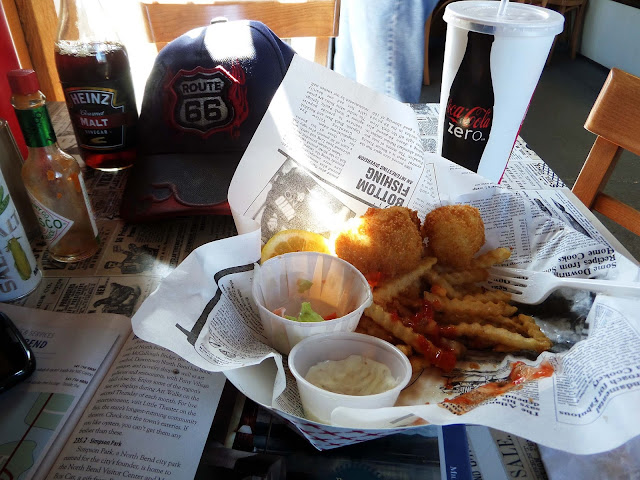 I'm not going to deny it, I love food! As a matter of course, since I live a simple, minimal and frugal lifestyle by choice, I enjoy a simple menu with foods I can easily keep and prepare in or outside My McVansion. BUT, I will splurge from time to time when the occasion calls for it. And this occasion called for it.

This order of fish and chips was so good, I almost forgot to stop and take a picture. Those two large pieces in the back of the tray are the remains of several large pieces of deliciously breaded and fried, hand cut fish. I believe she told me they used halibut. The cole slaw was homemade and very fresh. The tartar sauce is also homemade. Unfortunately, as seems to have become the standard, the chips, aka french fries, were of the commercial variety. Had the fries been real, English style, homemade “chips,” the meal would have been perfect. It was still excellent. (Side note: That is ice tea in the Coke Zero cup in the photo, I don't drink most carbonated soft drinks.)

No! I will not deprive myself of some of the great food tastes of our world . . . even if it is fried and I know fried food is “bad” for me. I don't want to be one of the health advocates who eat nothing but the best, organically grown, hand processed, healthy food and one day die . . . of nothing. We're all going to die one day and I aim to enjoy my share of pleasures before I do. So, some food may not be the healthiest and best, but it tastes good, so I'll indulge, guilt free. 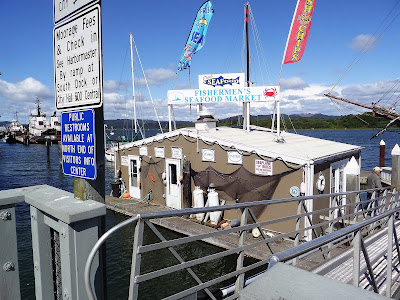 This seafood delight is one of the most popular dishes, er, make that baskets, on the menu at the Fishermen's Seafood Market in Coos Bay, Oregon. Maybe I should rephrase that to say “on” the bay at Coos Bay, Oregon. As you can see, the place is actually on a floating dock off the main boardwalk that parallels the Oregon Coast Highway, Rt. 101.

I couldn't have asked for a better day to drive through Coos Bay. The weather was beautiful. The town was vibrant and busy with a three block farmers and outdoor market with a festival atmosphere. I had so many choices of locally grown, raised and prepared foods, including a great looking hot dog stand – yes, I was tempted.

But, I parked a few parking spaces down on the Oregon Coast Highway from the gangplank leading to the Fishermen's Seafood Market. It caught my eye. I asked a couple local people about it and they gave it a hearty thumbs up. So, my choice was made. 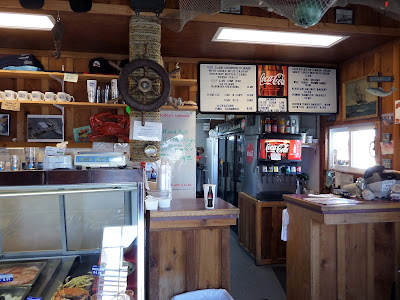 It's quite small and it's very simple and quaint inside. As you can see, it is a seafood market with fresh seafood in the case on the left side of the photo. So, you can buy, fresh, local seafood or you can buy prepared meals (notice the menu is small and limited) and take it out, or you can eat in at one of the four tables and chairs in the very small dining area. I, obviously, chose to eat in and enjoy the ambiance.

Now, to be honest, the best fish n chips I've ever had, to date, was still somewhere between Amagansett, New York and Montauk Point, at the eastern tip of Long Island. I'm remembering back about 35 years because my son was about two years old and he's now 37. The place was on the side of the road, near the ocean, probably on a sand dune, if my rememberer is still picturing it, even semi accurately. It was certainly not pretentious.

I was told, and I don't know how accurate this story is either, the place had been established on that spot about 300 years ago when some of the early colonists were making their way to the New World. Maybe that's a wive's (or fish) tale. I do know it was like other, similar, established, family places that had been around for a long time and handed down through generations. I've not been back to that precise area since that time, but the fish n chips are burned in my memory.

So, the bottom line, Fishermen's Seafood Market in Coos Bay, Oregon, Mmmmmm, good. If you're in Coos Bay (and you'd have to, pretty much, go out of your way to be in Coos Bay), do try it. I believe you'll find it worth your time and your taste buds will thank you.
Posted by Ed Helvey at 12:03 PM No comments: 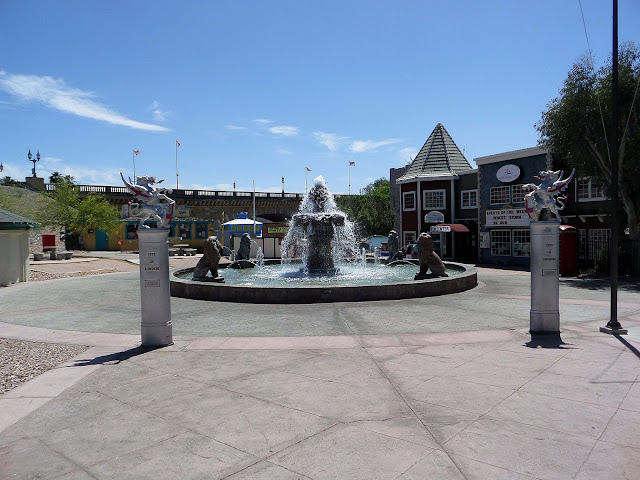 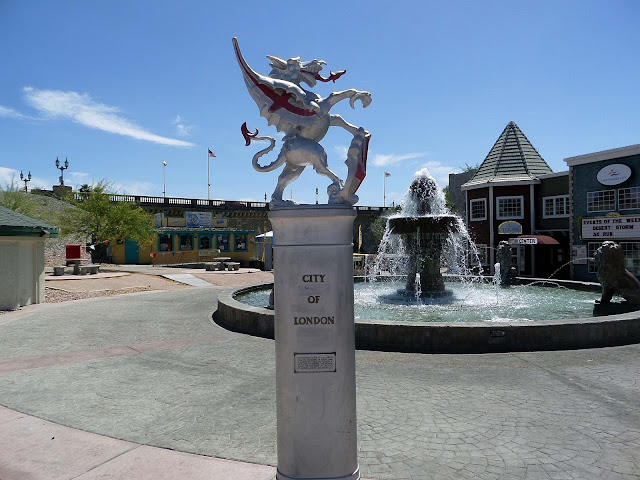 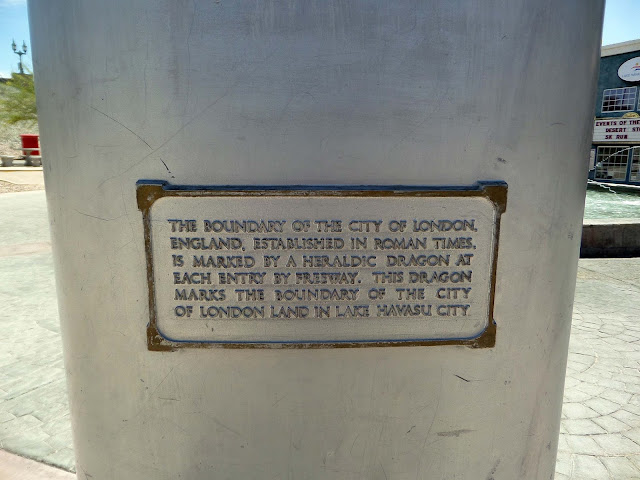 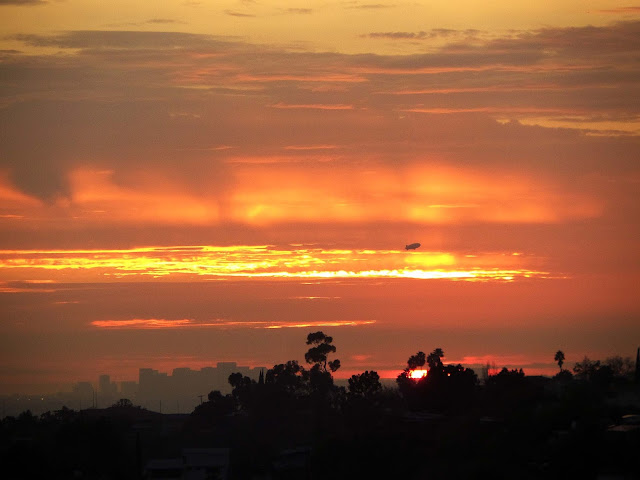 What can I say? I just love sunrises and sunsets and here's another example of a majestic sunset. I took this photo from one of the highest points in Los Angeles' Griffith Park, just below the Griffith Observatory. This was early evening, probably around 6:05 PM on January 8, 2015 to be precise.

There's not much to say about this photo. I think it speaks for itself. Nature projects its majesty even over a huge city and metropolitan area like Los Angeles. This view is, of course, looking out over the Pacific Ocean, which is not visible in the picture due to the buildings.

If you look carefully, you can see a blimp in the picture. I don't know if it was the Goodyear Blimp or some other advertiser's blimp, it was too far away to tell. But, I can honestly say it's been a while since I've seen a blimp. And, I can just imagine the view of the sunset over the Pacific from that blimp. Oh Yeah!
Posted by Ed Helvey at 8:00 AM No comments: 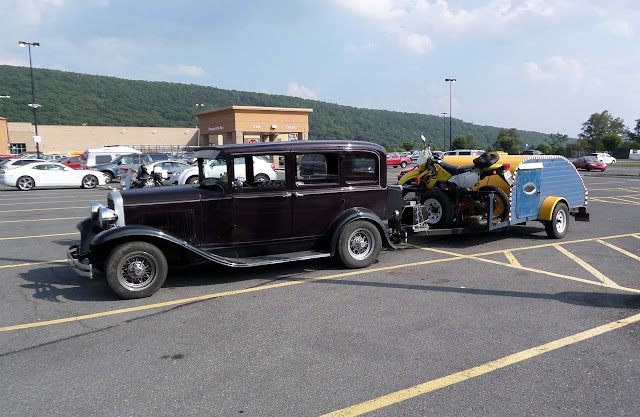 LaVale, Maryland is a suburb of Cumberland, Maryland in what's known as the "panhandle" in the western part of the state. It's about 22 miles north of my West Virginia base camp. As you can tell from the photos, this is the parking lot at the Walmart Supercenter and these are vehicles you won't see everyday.

I was in the LaVale (also spelled Lavale and La Vale, I can't be sure which is the most accepted) Walmart picking up some items for My McVansion that were not in stock in the New Creek, West Virginia store. When I came out to the parking lot, there was this unusual tow car and teardrop trailer. 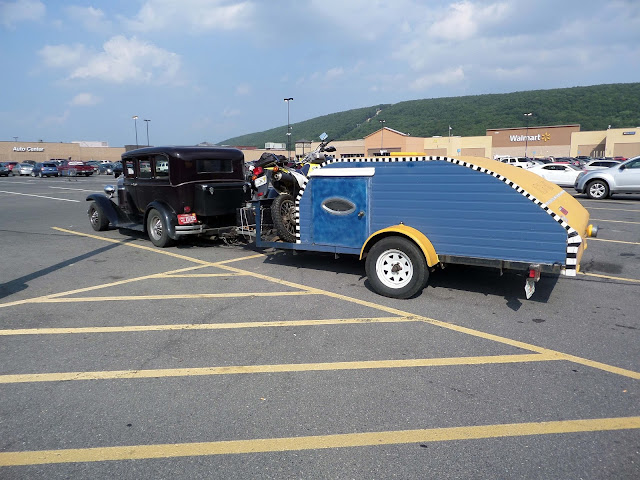 Obviously, the car was an antique and had been nicely restored. It reminded me of the old black and white, cops and robbers movies from the 1930's that either the police drove or the mobsters drove. Probably both when you think about it. The trailer appeared to be a homemade teardrop trailer. It looked to be built very sturdy, but it just didn't quite have that commercial "finish" to it.

I snapped a few photos and waited a short time to see if the owner(s) could fill me in on both vehicles. Alas, I couldn't wait all that long and they didn't return, so I never met the owners or had an opportunity to learn more about this RV arrangement one won't see everyday. It's just another example of the originality, uniqueness and individuality of the mobile lifestyle.
Posted by Ed Helvey at 3:00 AM No comments: