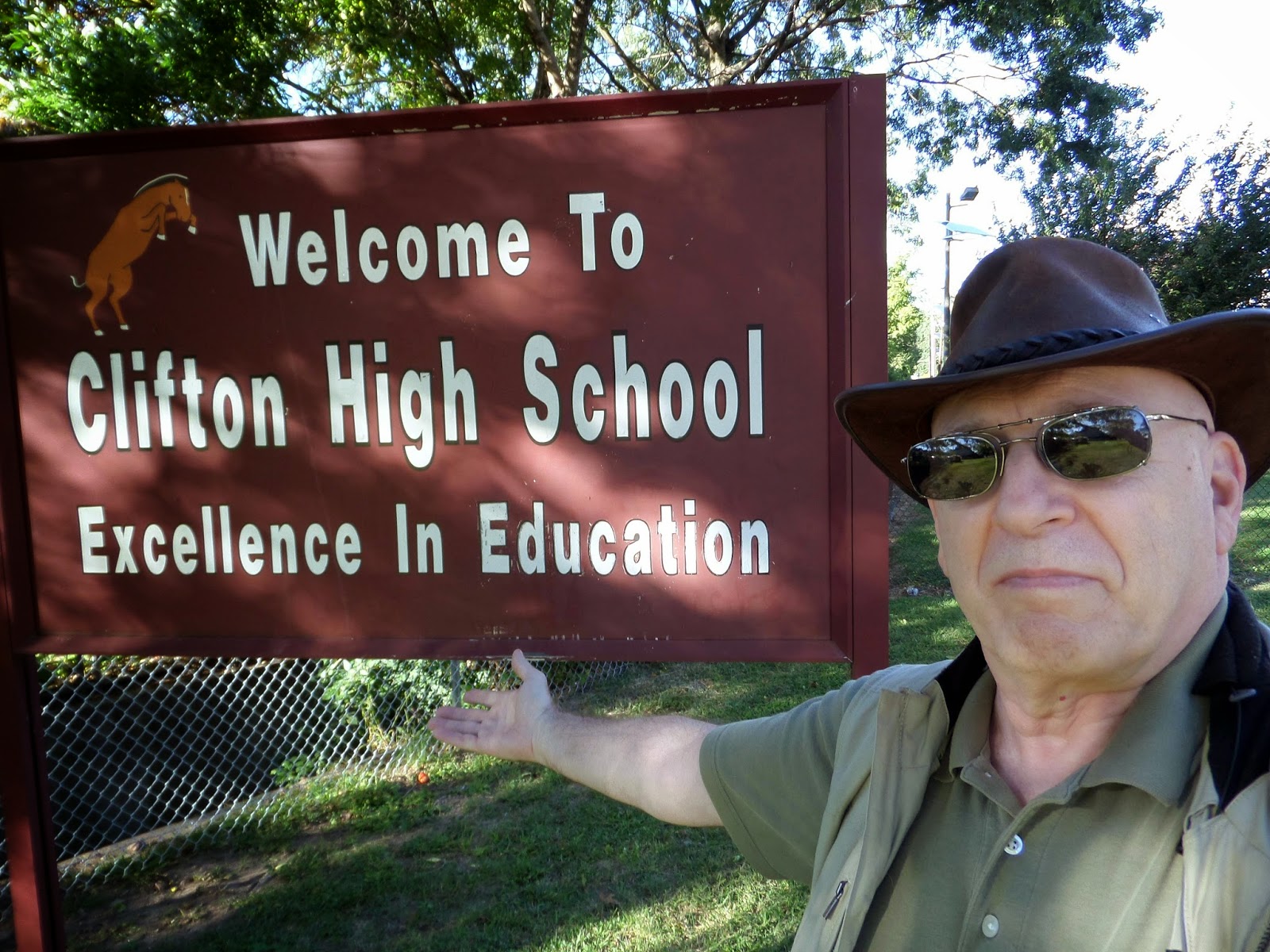 50 Years! Yes, it was 50 years ago in June of 1963 that I graduated from Clifton High School. And, here I am back at this school 50 years and three months from my commencement into adulthood. An interesting factoid is that my Class of 1963 was the first class to graduate from this structure or, as we termed it back then, the "new" Clifton High School.

A lot has happened during those 50 years. Clifton High School seems to have aged well. It is still a very pretty, clean and well manicured campus. The trees are now mature as opposed to the newly planted saplings in 1962 when we first walked on the campus. Other than a new wing being added sometime during those years, the structure appears to be much as it was 50 years ago.

I think most of us hold a certain pride in the schools we attended and graduated from. I certainly do. I'm proud to say I'm a CHS, the Fighting Mustangs, graduate. Of course, CHS was only 10th, 11th and 12th grade when I attended. The new wing that was added was for the 9th (freshman) grade. When I was in school, we were on the junior/senior high school plan. Clifton, like most boards of education have gone to the elementary - K-5, middle - 6-8 and high school - 9-12 model, necessitating the addition of a 9th grade, freshman, wing to the campus. But, I also felt some disappointment while I was visiting the campus. I'll explain that after this short montage of photos. Like the old saying a picture speaks a thousand words.

So, there is Clifton High School. What you didn't see is the dual gyms, one for the guys and one for the gals. You also didn't see the library and what used to the home economics, industrial arts, art and music part of the structure that was in the back of the school. And, you didn't see the circular cafeteria located in the center of the school structure like a hub with the kitchen in the center feeding the four quarters of the cafeteria. There were halls that led off each quarter of the cafeteria to different parts of the school. It is quite a structure and was probably the most advanced public high school complex in the U.S. in 1962/63. Many community colleges have been modeled after the design of the CHS campus.

Now for my disappointment. First, the school is now locked like a fortress. And the doors are so solid they feel like they may be armored, probably not, but I couldn't even rattle them. I visited after school hours, but there was still activity going on and I could see workers in the administrative offices. I couldn't get in the building to stop in the administrative offices and see if I could walk the halls of my alma mater and relive some memories. There was an intercom outside the main entrance that asked for me to press the button and communicate with the "guards" inside (I was beginning to feel like the place had turned into a prison). No one replied to my repeated buzzes. Ultimately a gave up.

The signs on the front door were also jarring. Wear I.D. as a student when I entered the building? It also looked like there may have been metal detectors inside the door. It also felt like I had just driven up to a major airport with a sign saying if I was dropping off or picking up a passenger I had to remain in the car. And that if I didn't act appropriately I would be prosecuted. We had none of this nor did we know anything of this nature when I attended the school 50 years prior. Also, there were substantial gates at all drivable entrances and exits from the campus. Again, something unheard of when I was there.

I noticed a number of students around the school and they were of a variety of ethnicities, races and nationalities. This showed that the school population (as the city population) had become diversified from the working, middle class, "white bread" (my term because I'm one of them) community that populated Clifton and the school system 50 years ago.

So, is diversity good or bad? Yes! I embrace diversity. I love people. I do my best to be color blind, respectful of all religious beliefs, nationalities, gender preferences, ethnicities and socio-economic differences - EXCEPT, when someone else of another of any of these characteristics, other than my own, makes an issue of it. So, sure, I think diversity is good. But, I've also seen visual changes in my hometown, many detrimental and degrading, as well as the surrounding cities. These changes are in communities and neighborhoods that used to be well kept, quiet and peaceful. So, in those cases, maybe not so good.

As for good old Clifton High School? Well, I'm happy to see that 50 years has been kinder to it than to most of us from that first graduating class. We're now dealing with aches, pains, wrinkles gray or loss of hair and moving slower than we were back then. That is, those of us who are still alive from the original class of 1963 that numbered about 800+ (The Class of '64, had around a thousand, I believe).

I'm proud to say I'm an alumnus of the Clifton High School, Class of 1963 and the first class to graduate from the "New" CHS. I'm disappointed to see some of the changes that have taken place during those 50 years. Technology may be light years ahead of where it was back then, but I think, in many ways, society has declined. You may feel differently, that's your right. But, I calls it as I sees it. I felt like a stranger in my hometown.

One final note to any of my classmates from the Class of  '63 who read my blog, especially those still living in Clifton or the nearby areas. Nothing I said here is a reflection on you or who you are or have become. Each of us left CHS to begin journeys as diverse as there are opportunities in the world. We each trod our own paths, experienced different things, lifestyles and parts of the United States and other countries. We are a now a product of all of these. I am only reporting my thoughts and feelings about Clifton and CHS from my perspective, as one who left Clifton in 1967 never to return to the area to live. Your views and feelings may well be very different from mine and I respect you and your views. If you care to leave a comment and voice your views, I welcome you to do so.
Posted by Ed Helvey at 3:35 PM