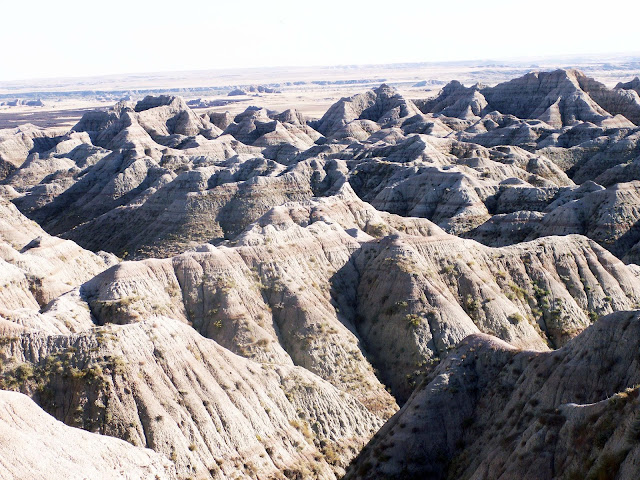 Here is just one of the many vistas of this unique landscape. This is in Badlands National Park in South Dakota. It's one more example of the awesome scenery, topography and geology that makes up the United States.

I drove through Badlands National Park the first time in late September of 2010 when I drove to Rapid City to finalize my change of residence and domicile to South Dakota and obtain my South Dakota drivers license. This is the fifth state I've held a drivers license from and had voting privileges.

It continues to amaze me how much there is to see just in the lower 48 of the United States. I've only scratched the surface and I've been traveling around this country for the better part of 50 years. Of course, a good part of that was on business, so the travel was mainly to major cities and metropolitan areas. But, now, while I've been to most of the major cities and metro areas, my focus is really on exploring the smaller cities and towns and the natural wonders of this land.

Of course, there is even more to see in Canada, Alaska and Mexico. I dare say, I have a lifetime of travel and exploration ahead of me without even leaving the North American continent. There are still a few places I'd like to see overseas, but frankly, with the hassles and inconveniences of air travel these days and so much turmoil in various parts of the world, for the most part, I'll be just as happy to visit the rest of the world through travelogues on large, flat screen, 3D TV's.

No, it's not the same as actually going to the places, eating the food, smelling the aromas and mingling with the people, but I've learned that everyone will die with “unfinished business.” So, I will still be looking for an opportunity to revisit New Zealand and I'd love to get to Australia. I would also like to revisit Ireland.

There are places in Europe I haven't been, but that's okay. I wouldn't mind getting back to Prague and Budapest. I've been to China, but frankly, from what I've seen of the explosive growth and pollution there, it's not high on my list to revisit. I wouldn't mind spending some more time in Hawaii and exploring the Big Island. I'd also enjoy visiting some of the Caribbean Islands and revisiting the Bahamas.

That's a lot of territory to cover in the X number of good travel years I have left ahead of me. Wherever I make it to will be a gift and I'm going to continue enjoying the lifestyle of a nomadic wanderer.