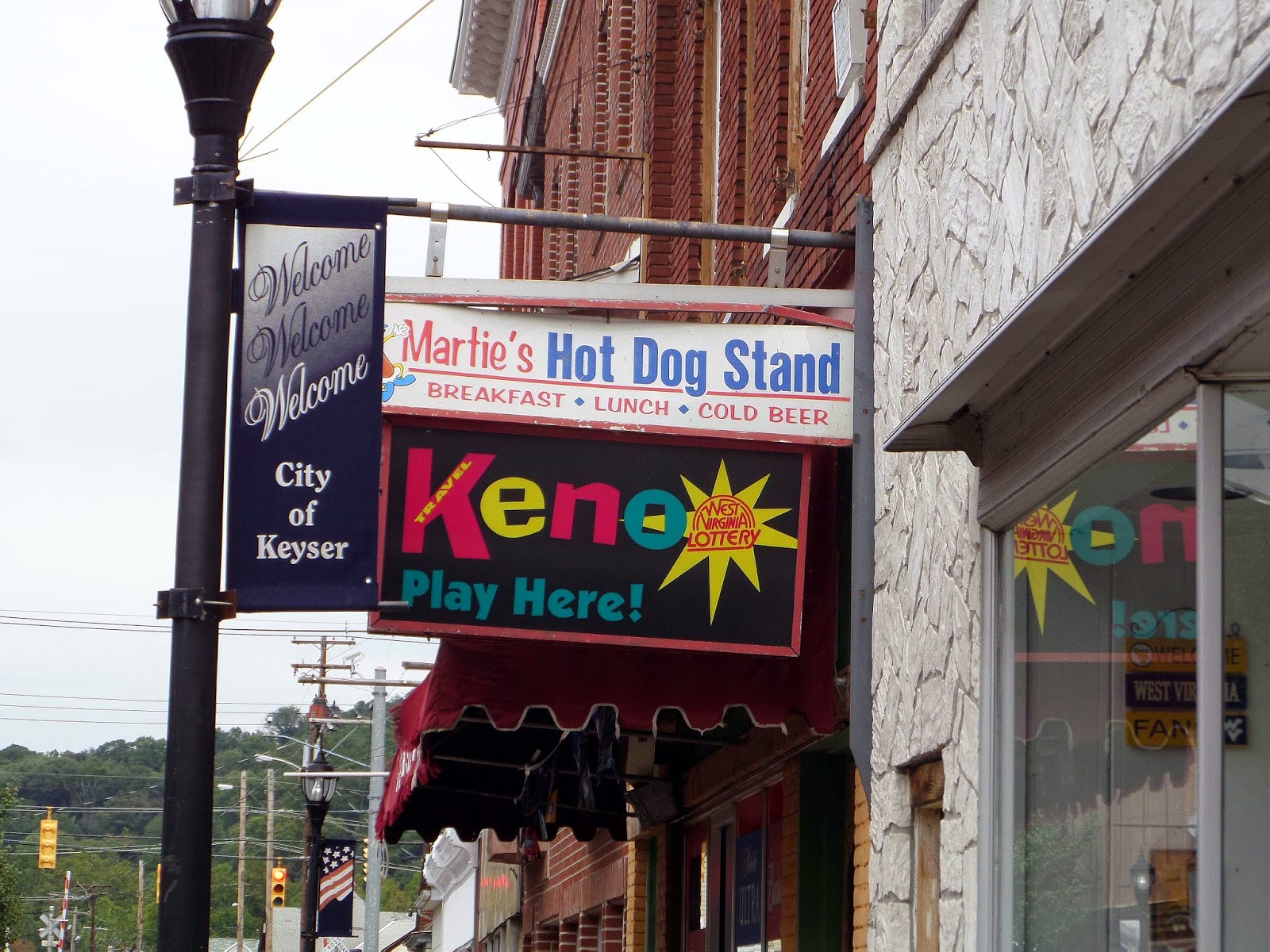 Here are some more photos from my Great Hotdog Caper. You already know that one of the Top 10 hotdog places in the U.S., as ranked by Public Television, is Rutt's Hut in my hometown of Clifton, New Jersey.

Well, here is another hometown place. It's Martie's Hot Dog Stand in Keyser, West Virginia. Keyser is my eastern base camp and I've passed Martie's many times as I've driven down the once thriving, now decrepit Main Street of Keyser. Like so many places in Americana, time and the economy have passed Keyser by.

I don't know how long Martie's has been in existence or at this location, but it is pretty much literally a "hole in the wall." Not unlike many old downtown areas in small, especially, rural areas, Main Street was at one time the "happening place" in this small town of just over 5,000 population. Not so in 2014.

Obviously, Martie's occupies a small, very old storefront that once was a framing gallery with one or more apartments over it. 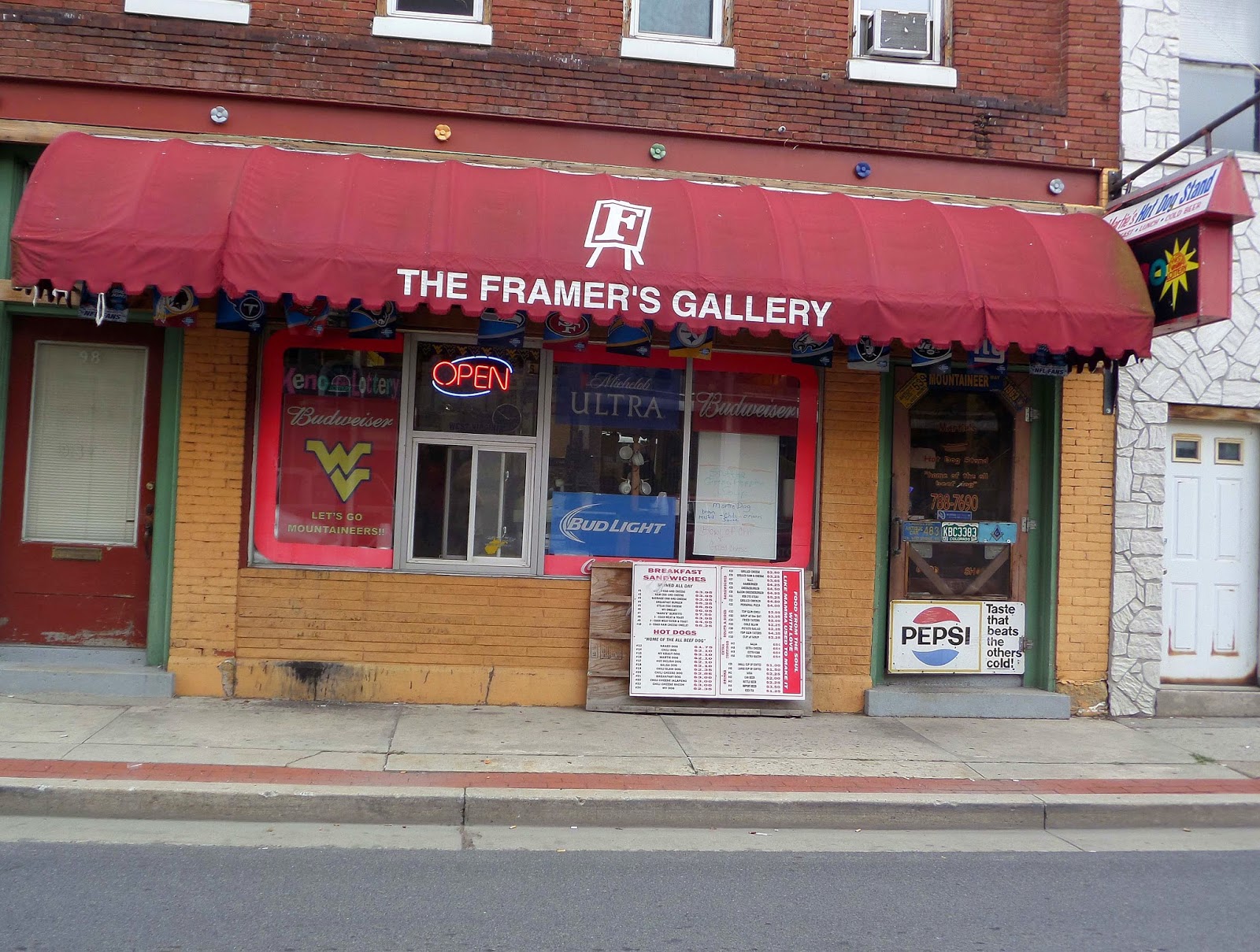 There are numerous vacant stores all around Martie's and those that are occupied probably haven't seen a serious renovation in decades. West Virginia, being one of the states often identified with Appalachia is in the now, almost non-existent coal mining and agricultural part of the country. A downsized, old paper mill is probably the only remaining industry in this area.

So, how about the hotdogs? Here are two of a variety of combinations you can order at Martie's. The hotdog on the right is Martie's version of a New York Kraut Dog. Not bad! The hotdog was good, the bun was fresh. The toppings included brown mustard, diced onions and a very healthy serving of sauerkraut. It appears they must heat the sauerkraut up on the grill, which is not to my particular liking. I prefer it as I get it in the New York area, fresh, out of the barrel. But, I'm not making any bones, it was good and I ate it all. 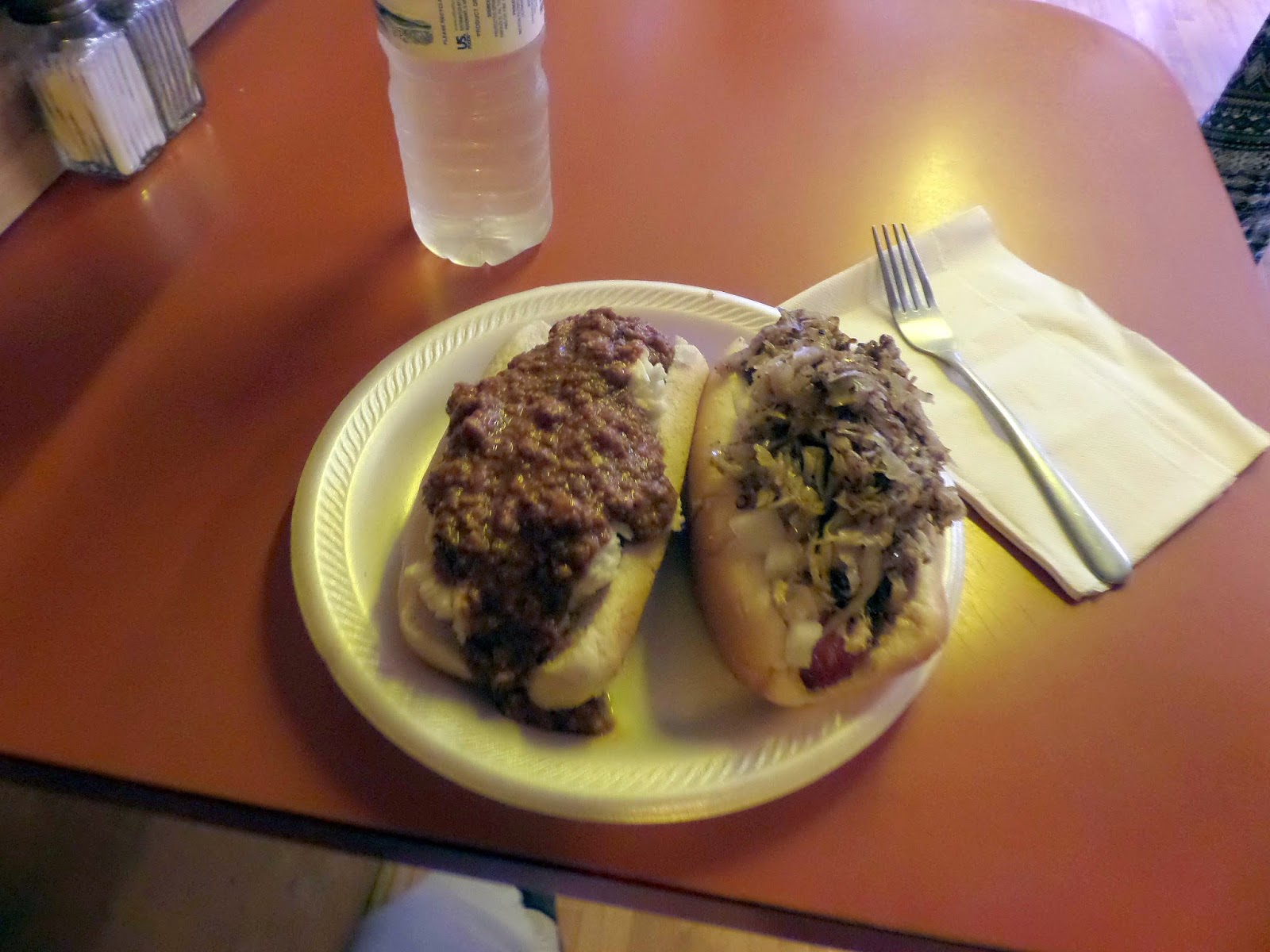 The hotdog on the left is what Martie's has dubbed their West Virginia Dog. I believe there was some mustard under there and probably some diced onions, but there was a huge amount of coleslaw topped with nice hot hotdog chili - no beans. It looks sloppy and it is. Even my big mouth wasn't big enough to get a bite of the entire thing at one shot. But, the combination was delicious. I had never thought of combining coleslaw and chili before, but it works - at least for me.

I can't say I rank Martie's in the Top 10, but certainly for a hometown hotdog, I'd go there again and I'm sure they must have a large enough group of regulars to keep the place alive and kicking. Of course, as you may have noted on their sign, they serve breakfast, lunch and beer, they are an outlet for the West Virginia Lottery and one can play Keno there, which seems to be very popular in the Keyser area.

Oh yeah, and they are friendly, accommodating and it's an interesting place to just sit and eavesdrop. When I was there around mid-afternoon on a weekday, I was the only hotdog customer at that time. But, there were several others enjoying a cold brewski and having a very heated conversation about a local political issue. A woman who walked in for some reason and appeared to be employed by the local government was the focal point (or maybe target) of the discussion. It was fun listening and I even got to participate a bit.

The general ambiance at Martie's is somewhere between early diner and a dive, but the conversation brought the place to life. Altogether a fun, enjoyable experience and the dogs were good, too.
Posted by Ed Helvey at 9:33 AM