Breakfast Fit For A King - King Of The Mountain, That Is 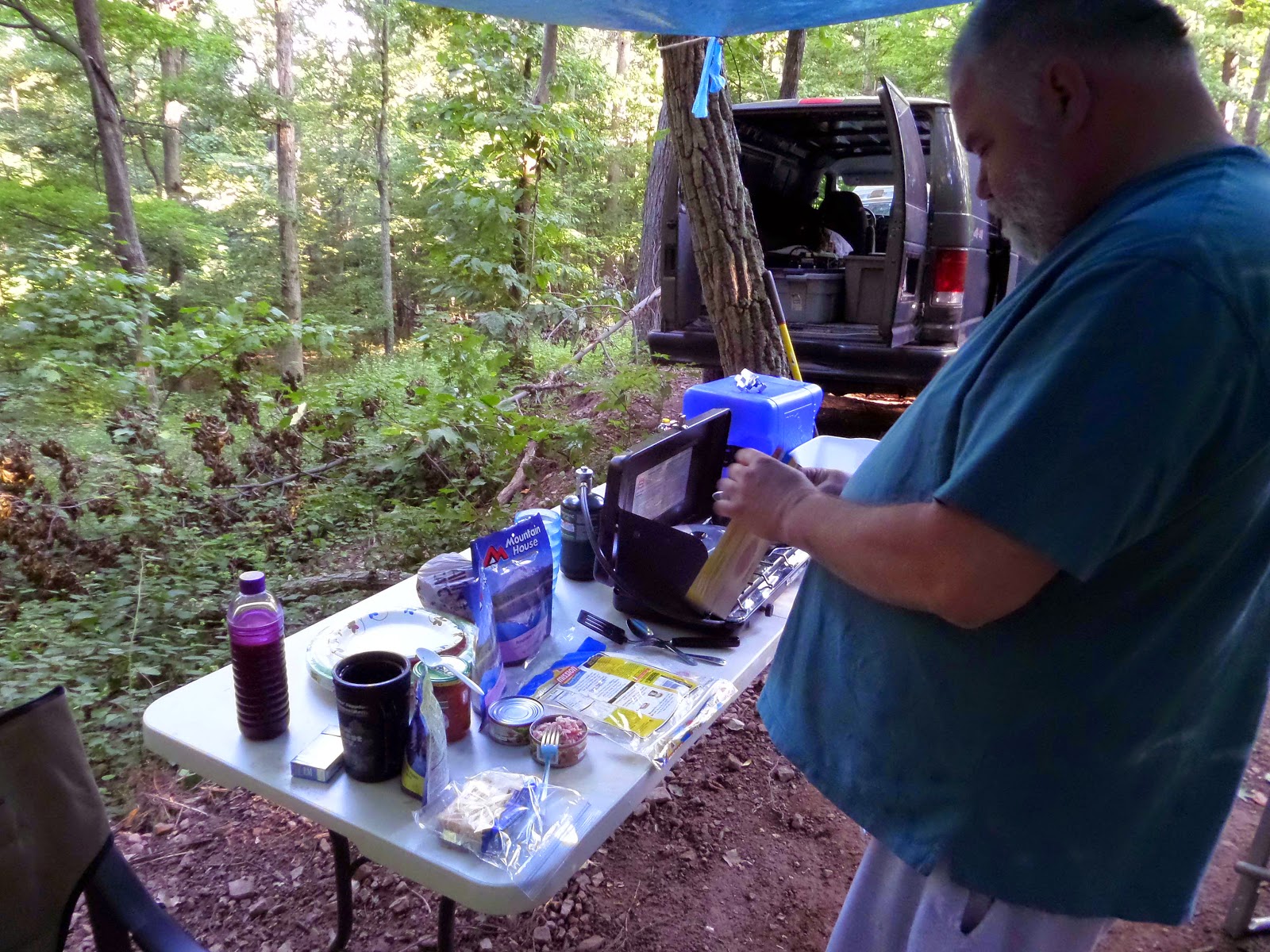 A short while back I received an email invitation from fellow Vandweller, Dave Campbell. Dave is based in Virginia, a little bit south of Washington, DC. Dan is not retired or a full-time vandweller, but he's looking forward to a time in the foreseeable future when he'll be in a position to make the change from his current full-time employed lifestyle to one where he has more control over his life.

As I said, Dave emailed me an invitation to join him at the ten acres of lush forested, mountain top land for a get together and first time meeting. The ten acres are Dan's answer to leaving the congestion, complication and maddening crowds of the U.S. Capital and the region surrounding it. My first and continuing impression is that he made an excellent investment, first for his own mental health because this place is very therapeutic and second, it's a place he could consider moving to when he's completed his professional career with the madness that is Washington, DC.

Dave had invited a couple other people to join us, but for whatever reasons, they were unable to be there. And due to some extenuating circumstances on my account, while I would have loved staying in that bucolic setting for several days over the Labor Day holiday weekend, I also had to leave, though I did have the intention of returning about two days later. Unfortunately, the weather got a little sketchy and Dave decided to head back to his base camp earlier than planned.

But, while there were some annoying bugs, easily handled with a little DEET, it was about as peaceful, quiet and relaxing a setting as I can recall being in since I spent a few days at Tumbling Creek Campground in Cherokee National Forest, Tennessee with one Cuzzin Dick earlier this year. A few "good ole boys" who lived on the mountain stopped by and we had a pleasant time conversing with them about things those city folks don't have a clue about. If you're getting the impression that this was a positive experience, then I've made my point.

Before I headed up there, Dave told me he was bring all the food we'd need because we were going to do some experimenting. That sounded both intriguing and exciting because I figured I'd enjoy some good food and learn some tips and ideas about preparing simple, tasty meals on the road.

When I arrived, Dave helped me maneuver My McVansion into a decent parked position. After we enjoyed some pleasantries and wet our whistles with pleasant libations, Dave suggested we prepare dinner. And, at this point enters a new name, that of one Dan Cordray. Dan and Dave have met up in person. I have yet to enjoy that pleasure, but Dan and I communicate about various things travel and vandwelling. Dan hails from Florida, but currently resides somewhere in Kentucky. I'm hoping to meet up with him later this fall when I head through that part of the country.

"Chef Dan" the on the road cookin' man, showed Dave some interesting tricks when they met up and Dave was going to do his own versions of some of Dan's recipes. So, for dinner we had Sloppy Joe Roll-ups. These were simple to make. First, take some Sloppy Joe meat, either home made or from a can of already made Sloppy Joe meat. Dave chose the latter. Scoop it in the center of a 12" flour tortilla (for those more health conscious, you can use whole wheat tortillas). Lay some cheese on top of the meat. Real cheese tastes best. At this point one can add extras like diced onions, green peppers, tomatoes, etc. and it can be spiced up a bit with your favorite seasonings or hot sauce. We kept our simple and applied a bit of hot sauce after the fact.

Once you have it loaded the way you'd like it, flip one side of the tortilla over all the tasty inner filling, fold in both ends and finish rolling the tortilla until is looks like a traditional Mexican burrito. At this point comes the "cooking" stage. Dan typically, from what Dave explained, wrapped the Sloppy Joe Roll-up in heavy duty, aluminum foil and then placed then right in an open fire. I definitely like that idea. I've done my own share of experimenting and cooking in aluminum foil packets. I recently downloaded an entire cookbook about aluminum foil packet cooking while camping. So, I'm into this.

But, Dave showed me a new trick. He had his two burner, propane camp stove on the table and a medium sized frying pan. Don't jump to conclusions. We didn't fry the roll-ups. We BAKED them. Once they were made and the frying pan was heated up we place the two roll-ups side by side, covered the pan with a tightly fitting cover and heated up the pan on the stove. The we turned the stove burner off and just let the roll-ups back inside the heated frying pan. After a little while passed, Dave flipped them over, put the cover back on, turned on the heat again, heated the pan and turned it off and let them bake some more. I believe we flipped them once more before taking them out.

WOW! There were toasted golden brown. You could hear the fixin's bubbling inside the slightly toasted tortilla shell. And now, the moment of truth was upon us. It was time to try these beautiful Sloppy Joe delicacies. OMG! This was a meal to sit and savor. It was simple to prepare. It took very little time to make up the roll-ups and bake them. I'd say it was about 20 minutes from getting the fixin's out on the table until removing them from the frying pan "oven."

Honestly, one Sloppy Joe Roll-up each was enough to fill each of us. But, they were so good, and so as not to leave any Sloppy Joe meat to store or throw away, we each had a second. Dave proclaimed that we had created our own "Hot Pockets." We also ascertained that if one chose to, the actual roll-ups could be prepared at base camp and brought to the campsite location ready to bake. It might have saved a little time and a little trash, but it was fun doing the prep work on the spot and clean up time was negligible.

I have only one regret. Darn, I forgot to pull out the camera to show you this delightful meal.

Oh yes! This time I didn't forget to get the camera out. Dave was going to repeat his performance from the evening before. Once again, inspired by our friend, Dan Cordray, he got those tortillas out again. This time we were going to make Breakfast Roll-ups. The plan was to use previously hard-boiled eggs, bacon and some ham and cheese to top it off. I had a fresh jar of medium salsa with me, so we could make them a bit more Mexican style if we chose to.

Unfortunately, Dave realized that he forgot the hard-boiled eggs. However, he did have a pouch of Harvest House freeze dried scrambled eggs. Harvest House is an offshoot of an Oregon company that has been supplying freeze dried foods to the U.S. military Special Forces since the Vietnam War. They replaced to old C and K rations. The scrambled eggs were easy to prepare. Simply pour some boiling water into the opened pouch, stir or shake the contents to mix with the water, then let them reconstitute and heat up for about six or eight minutes.

While the eggs were getting ready, we started to prepare the tortillas, So, this time I'm going to do the entire prep, baking and show the finished product in photos.

Life on the road can be better than good, it can be great.

There you have it. Frankly, I'm going to prepare some of these kinds of meals when I'm at one of my base camps. Living a simple, minimalism, nomadic, living free, lifestyle doesn't mean that one gives up the finer things of life, like delicious and varied meals of the kinds of foods we thoroughly enjoy.

My thanks to Dave Campbell for the invitation, pleasant company, beautiful setting, outdoor cooking lessons and delicious meals. I also tip "The Hat" to our friend, Dan Cordray, (who also has "The Hat") for his inspiration and introducing Dave to these ideas. Compliments to the "Chefs."
Posted by Ed Helvey at 5:18 PM