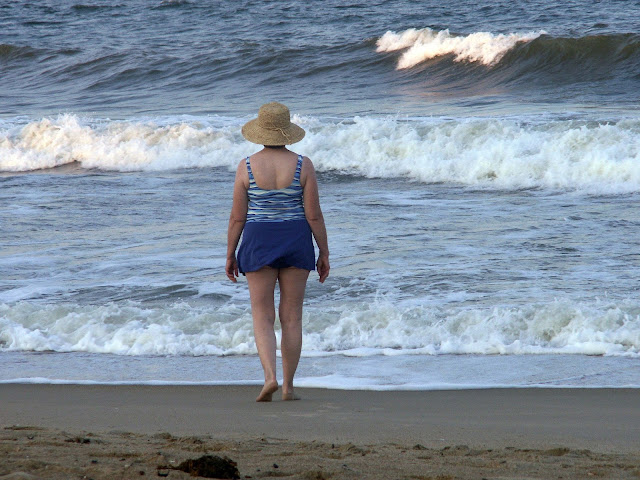 Well, if wishes were fishes, this is were I'd be today, the beach where it is warm(er) or anywhere like it. I'm still in the beautiful state of “Wild and Wonderful” West Virginia. This is a beautiful state, for anyone who has never been here. It has a wonderful state park system. I highly recommend you visit this state when you can. You won't be sorry.

That being said, last night the temperature was a couple degrees above freezing and factoring in the wind, the temperature felt as low as at least 10 degrees below zero Fahrenheit. Go ahead. Call me a wimp! Sticks and stones can break my bones, but I don't give a damn what names you call me. That is flipping COLD.

Now, please, understand . . . I grew up in northern New Jersey during the last half of the 1940's, all of the 1950's and most of the 1960's. We experienced serious cold and serious winter snow and ice events. We ice skated, ice boated and ice sailed on natural ponds and lakes that were frozen thick enough you could drive the average car on the ice.

I also lived in Syracuse, New York at the end of the 60's and experienced sub-zero temperatures (actual not wind chill) as low as -32 degrees. The temperatures never came above 0 for a period of 10 – 12 days, at one point. Snow was a way of life in that region. Nothing ever closed including schools, colleges or businesses. I am fully aware, versed and experienced in winter, cold and snow.

I DON'T LIKE OR ENJOY COLD AND MAJOR SNOW EVENTS ANY LONGER! I've paid my dues. Anyone who likes it, I'm happy for you and I gift you my share. If you don't like it, but you stay there, that's a choice you make, I neither sympathize or empathize with you. You can choose to change your circumstances. I prefer to happily watch the cold and snow on TV OR at my choice, go visit the snow for a short time, then leave.

It wasn't my plan to remain in this region this winter. My plans were to be somewhere (actually, anywhere) warmer or, at least, more moderate than where I'm at. However, there were mitigating circumstances causing me to choose to remain here. I don't have any negative thoughts or feelings about the choice I made. I'm free and could have made the choice to leave. So, I'm not complaining. I'm simply saying I don't like cold and major snow and ice events any longer. So, I'm tolerating the circumstances, fully accepting and acknowledging I made the choice to remain here. I'm not being held hostage. I could have left.

And, as the title of this article states, “If Wishes Were Fishes” I'd prefer to be on that beach on the Outer Banks of North Carolina (though it's probably quite a bit colder there right now than when I took this photo). It's actually been pretty cold throughout much of the U.S. during the past month and a half or so. But, as some of my friends, in warmer places, have been complaining about the cold where they are, those wishes swimming around in my bathtub would have me in any of many of those warmer or, at last, more moderate temperature places.

Let's face it, friends, we just have to suck it up and accept that we can't have it the way we want it all the time. This is what makes life so interesting. Having the personal freedom, to choose to remain here or to move my well-padded backside pretty much anywhere at anytime I choose to, is what life is all about. Live free and be happy. EH
Posted by Ed Helvey at 2:37 PM