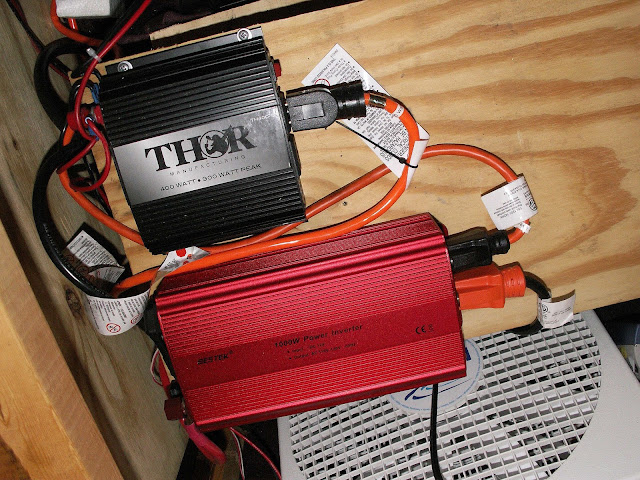 I will also state that I bought and returned (twice, actually) an inverter from a well-known online and retail "freight" company with stores throughout the U.S. Neither one would do the job I purchased them for. I thought, perhaps the first one was faulty, so I returned it and bought a second identical unit. I actually installed it in the parking lot of the establishment with the same result. So, I returned it immediate. I was definitely disappointed. They were 400 watt inverters.

The first inverter I bought from Amazon, after my initial unhappy experience, was a Thor 400 watt modified sine wave unit, model TH400. It had very high marks in all the reviews I read. It is well built, easy to install and works exactly as it should. I bought it with the express intention of using it to power my Black &amp; Decker 2.7 cubic foot compressor refrigerator. I also intended to add a second 1,000 watt inverter at a later date to use for operating other systems and devices that might require higher power. 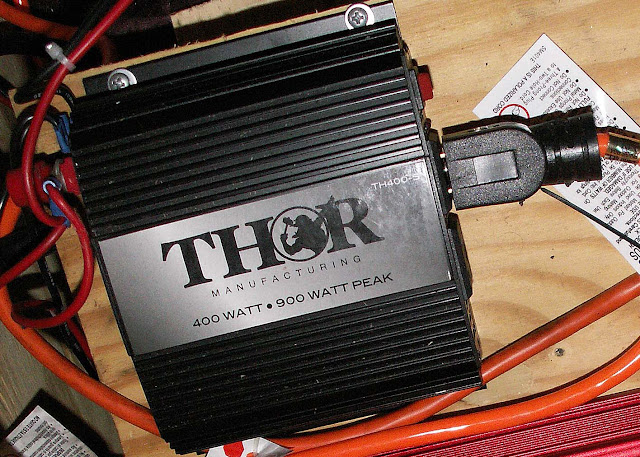 The Thor unit worked alright. I say that with less than total enthusiasm not because of the Thor TH400. It has actually performed perfectly. The problem is that I should have realized that the output of a modified sine wave inverter is lower than that of a full sine wave unit. Thus, the start up transient when the refrigerator compressor kicked in would sometimes trip the TH400 into overload and cause it to go into "fault" mode. Thus, no power to the refrigerator. I have used the inverter to power other devices without fail or problems.

So, my advice to anyone planning to use one of the inexpensive "dorm room" style compressor refrigerators, readily available from lots of sellers, is to minimally use at least a 600 watt and preferably a 750 watt modified sine wave inverter.

The Thor TH400 is an excellent piece of mobile power equipment and I will give it five stars. It has a two year manufacturer's warranty for parts and labor.


The current price at Amazon.com including free shipping is: $43.98

The second inverter I bought from Amazon is the Bestek model MRI10011, 1,000 watt modified sine wave inverter. This is a Chinese manufactured unit and I was a bit hesitant until I did some research and read lots of reviews. The unit is rated at 1,000 watts, however, it will deliver up to 1,200 watts, so there is a margin of error built into the rating. The surge rating is 2,400 watts. So, this unit was more than adequate for my refrigerator. And, as I mentioned earlier, I had planned to add a 1,000 watt inverter to my van anyway. 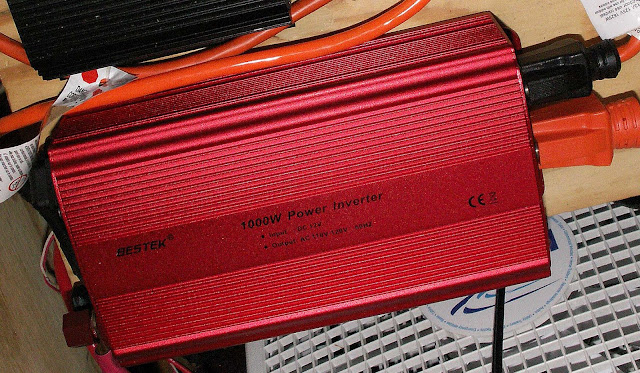 Once again, the installation was easy. However, I did purchase some #4 gauge battery wires to go from my house battery to the inverter. The wires are only 12" long, so there is negligible voltage loss. Like the Thor, this Bestek operates quietly and cool. It turns on every time without a glitch and it powers the refrigerator with power to spare.

Here are the important facts about the Bestek MRI10011 inverter:


I give this Bestek inverter five stars, too. While it only has a 12 month warranty, that was not a deal breaker for me. I've been very pleased with its operation and reliability over the past seven months.

Both the Thor TH400 and the Bestek MRI10011 include the inverters, a cigarette lighter plug cable and a pair of wires with alligator clips. Both sets of wires have terminal lugs on the inverter end. Both include simple instructions. Both units claim an operating efficiency rating of about 90%, which is average for a modified sine wave inverter.

At this point the Thor is pretty much surplus to my requirements. I've actually found I have less use for 110 VAC than I originally projected. I use 12 VDC (or propane) for operating almost everything I use in the van other than the refrigerator. My laptop computer is even powered/charged from the 12 VDC circuits. But, for the foreseeable future, I'll keep the Thor TH400 mounted in the van next to the Bestek.

If your AC power requirements are minimal and low enough, I'd highly recommend the Thor TH400 and that's from my personal experience. I wouldn't plan to use it with a "dorm" type compressor refrigerator. It's reliability is spotty in that usage.

If your requirements are higher (and definitely if you are going to power a "dorm" style compressor refrigerator), I'd opt for the Bestek MRI10011 thousand watt inverter. For not quite twice the investment, $79.99, you have 2.5 times the power available.

There are lots of inverters in the market and I looked at a lot of them. Some were priced higher and some lower. I usually look for the best value when I am investing in something I plan to use for a long time. I'm completely happy with my selections of these two inverters and, should you choose to purchase one of these units, I'm sure you will be, too. Of course, Amazon offers a 30 day return policy, so that's an added measure of consumer security. But, always check in advance to make sure of the return policy on the specific item you're buying. I'm including links to these two items at Amazon for your convenience.

Disclaimer: I am a sales affiliate for almost everything I will review. If you choose to purchase the items through my links it will result in me receiving a small sales commission on anything purchased through my site and the links. As you may be aware, the purchaser pays the same price for the item whether it's purchased through my link or not. So, I hope you will click through on my links and help me support my blogs and keeping my wheels rolling as I explore America.

By the way, most affiliate arrangements do not count purchases I make for myself through my own links towards commissions. So, I usually use someone else's links to make my own purchases, thus, contributing to his or her commissions. It's my way to help spread the wealth.
Posted by Ed Helvey at 2:52 PM