Photos-of-the-Week #220 The Past in the Present, Syracuse University, Syracuse, New York, June 2014 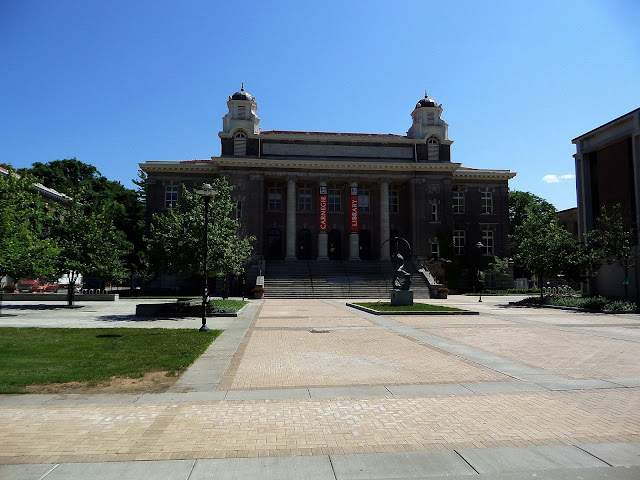 June of 2014 found me revisiting an important and a pivotal location from my past. I was back in Syracuse, New York visiting my dear friends, John and Pat Hottenstein and our alma mater, Syracuse University. John was (and still is, of course) an ordained minister and Pat was a nurse. John and I met as students. We were in the Masters in Television & Radio program at the Newhouse School of Public Communications. I don't remember if it was Sequence 20 or 21, the years have made that blurry. There were 52 of us in the program as I recall. 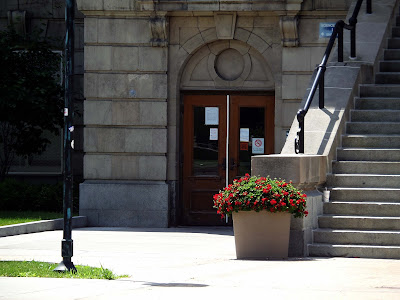 The building pictured above is Carnegie Library. It was the main library for the university at that time (1967 & 1968). It was also the headquarters for the Television & Radio Department. The very old, black & white TV studio was housed there with a selection of 1950's equipment. This door, to the left of the steps leading to the main library entrance, took us into the basement where we spent a portion of our time in the studio. 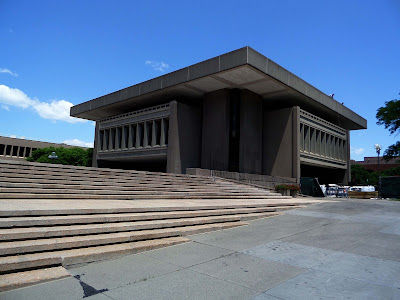 Across the street from the main, original campus was the new portion of the expanding campus including this building, then called the Newhouse Building and now referred to as Newhouse I since Newhouse II and Newhouse III have been added to the complex. We spent much of our classroom time in this building. Actually, the building was primarily for the Journalism part of the Newhouse School, but we TV-R types tended to refer to it as the Mausoleum to the Dead Medium (except it still hasn't died) 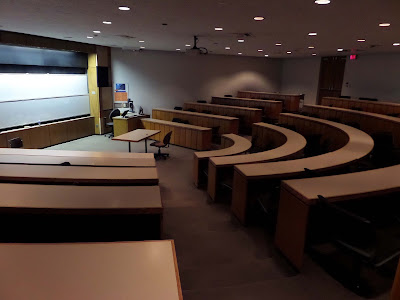 This room was in the basement of the Newhouse building. We seemed to be relegated to the basement a lot. I hadn't thought about that before. As Rodney Dangerfield would say, "I don't get no respect." This is where I remember we all met in one room for the first time. We went around the room that first day, introducing ourselves, where we came from our undergraduate alma maters and, I believe, our undergraduate majors.

An interesting side note is that one of the people in that room that day transferred out of our Sequence to another masters program. I never got to know Bill until about 23 or 24 years later when Bill and I both became members of the National Speakers Association. It always interests me how these connections work. Unfortunately, Bill passed away about 8 years ago or renal cancer, way to young. It was interesting standing in this room 47 years later and thinking about how much of my life changed, the people I met and the loss of my friend that all had connection through this one room. 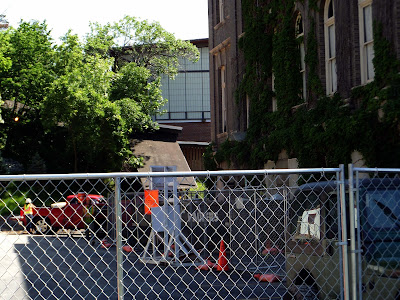 This final picture takes us back up to Carnegie Library. This is looking at a construction area on the left side of the library. The large, modern building in the background did not exist in 1967. Actually, what was in that building was an old WWII Quonset hut type building that housed the campus FM station, WAER. Obviously, that old building is long gone and replaced. I couldn't go back there to visit the site, but I understand there is a large boulder there with a plaque on it commemorating the location of the original WAER building.

I had an office and radio studio in that building where I executed my graduate assistantship duties of producing and making sure the daily programs of the Empire State FM School of the Air were broadcast to a 17 station network throughout New York State. My understanding is that the School of the Air went off the air permanently a year or two after I was there. And, WAER, well, it's now a high power, public radio station with a new building a few blocks from the main campus.

One other interesting note is that (and I forgot to grab a photo) the Carrier Dome where Syracuse played it's football games and other events was built just about two buildings away from Carnegie Library. The Dome wasn't there before I left Syracuse and I understand that it's about to be demolished and replaced by a new stadium near downtown Syracuse. Thankfully, I'm not as easy to build up and then demolish. I'm still around for a while.

This location and these buildings and the people I met there were all a very important and pivotal part of my future. Of course, I wouldn't know how much so until decades later. This was also the place where I enlisted in the U.S. Air Force during the Vietnam War. And that was, yet, another pivotal event.
Posted by Ed Helvey at 4:49 PM