I'm back on the road! Hooray! With many and almost all the refinements, modification and project completions accomplished, I have been anxious to get My McVansion on the road and test it out. I finally headed out about 7 PM on Monday August 9, 2014 from base camp Keyser, West Virginia. The van was pretty well packed, though there was some stuff I just threw in and figured I'd organize and stow it later.

First stop was to visit with a friend from the Vandweller Forum, Gypsy Jane, who was now too far outside Keyser at an 18th Century encampment. I managed to miss my landmarks, I got there a lot, make that a LOT, later than I planned to. It was just about dark. I did get a chance to see Jane's new Tipi, which I found quite impressive. Jane had cooked up some vittles on an open fire in a small caldron. That is probably not the correct name for the pot, but is the best way I know how to describe it. I enjoyed a delicious meal Jane had prepared. Had I not filled myself with a delicious, very large salad a few hours earlier that my friend Carolyn had prepared, I would have partaken in second and maybe third helpings.

It was well after dark when I finally left Jane's encampment and made my way to Winchester, Virginia. I spent the night in this Walmart. 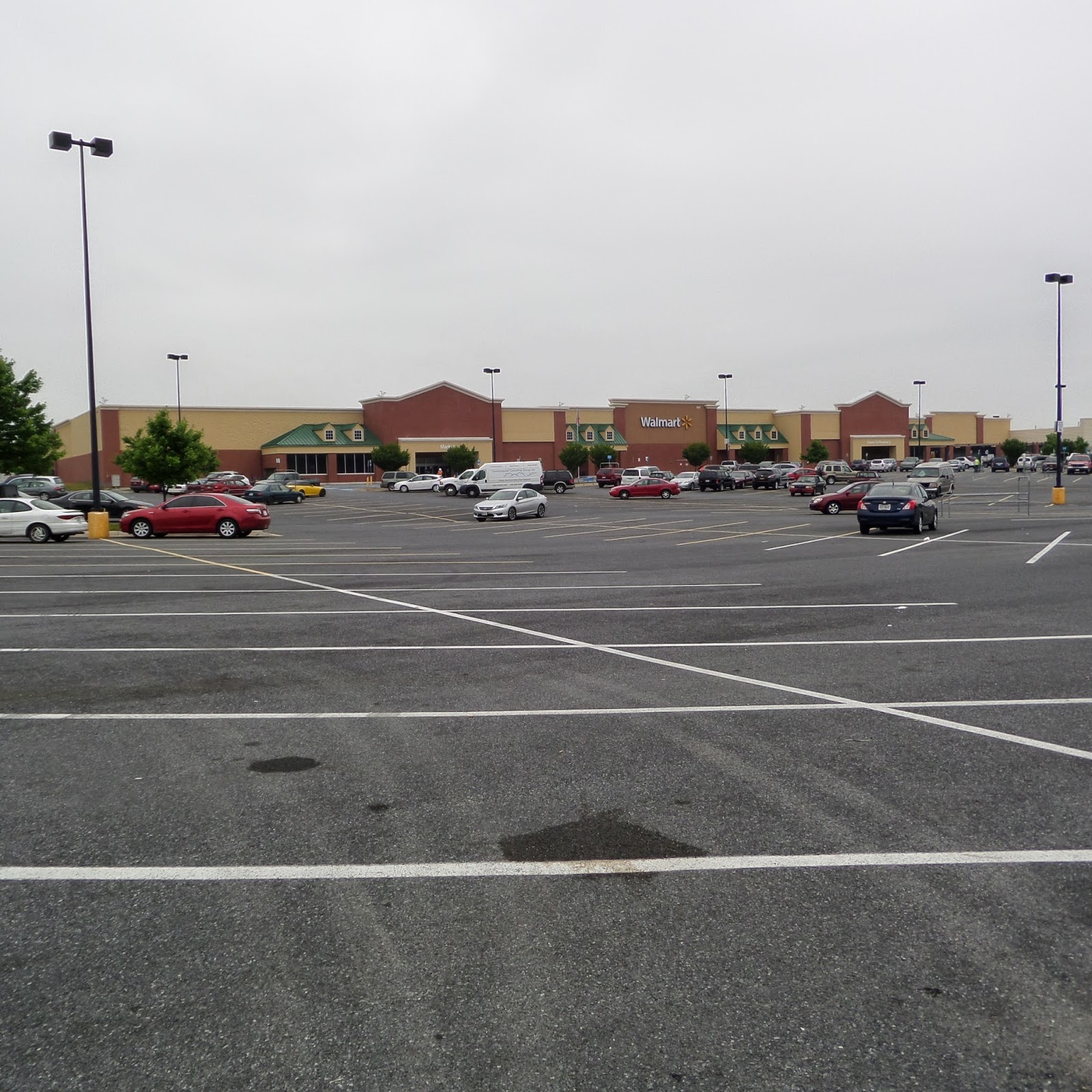 This is a benchmark for me. This Walmart is about three miles from the two houses on the mountain where I lived for 13 of the 27 years I made my home in Winchester. Why is this a benchmark? Because it is the first time I've stayed in a Walmart in Winchester rather than in my own home or in the home of my long-time friend, Judy. Winchester has now changed its status for me since I stayed in A Walmart "Motor Inn" for the first time. It's now like any other place I stay during my nomadic travels.

On Tuesday morning, I headed over to a new supermarket in Winchester operated by an Amish organization. It's called Smart Shopper. Walmart has good prices, Aldi often has better prices, but Smart Shopper beats them both by a considerable margin. So, I gathered some provisions for the trek.

I then made a quick stop at Camping World to pick up a Fan-Tastic Endless Breeze fan to provide serious air movement in the van. I took care of a couple other quick errands in Winchester then headed south to Front Royal to deliver some CD Duplication Masters to National Media Services and to have lunch with my former business partner Mike. I also filled up the gas tank on the van since Front Royal almost always has the lowest gas prices in the region - often a dime less than Winchester. Then it was back up to Winchester to stop by my mechanic's shop and say farewell as I left on this trek. But, Marty was not there and his door was locked. That was a first.

So, gas tank full, oil changed and air conditioner topped off a week before, McVansion loaded lots of new improvements and refinements as noted earlier, it was time to point the "bow" northward and head for my overnight destination, the Walmart "Motor Inn" in Philipsburg, New Jersey. I've stayed at this location on several occasions and since there is a White Castle, purveyor of tiny "slider" style hamburgers for longer than I've been on this planet, I was salivating all the way looking forward to a nostalgic dinner treat. I drove I-81 to Chambersburg, Pennsylvania and then took Blue Highways across the state through Gettysburg, Lancaster and Reading where I finally went slightly north and connected with I-78 just west of Allentown. I-78 took me to Philipsburg, New Jersey, about 20 miles further east, I believe, and my destination at the Wally World and my dinner at the White Castle.

After a good night's sleep, I checked emails, took care of a bit of work and then headed toward Garfield, New Jersey, the city where my father was raised and where I would meet up with my son who was taking a bus from the New York Port Authority Bus Terminal to meet me. We met at around 4 PM and it was a great time for me. It was the first time I had seen my son since I spent a couple weeks with him in Seattle, virtually, two years to the week. He flew into Hartford, Connecticut to attend a conference and then went to New York City to meet with some of the "Suits" on Madison Avenue from his new employer, Price Waterhouse Cooper. You'll see in future photos in this post that my son doesn't do the "suit" gig. He's a creative type and they weren't sure what to make of him in the Madison Avenue offices, but they love his work.

Checking Out The Old Man's Roots

My son was officially working, so he was actually playing "hooky." But, with a cell phone, texting, email, his notebook computer and either free public wifi or wireless wifi from his or my wireless phone service, he was able to stay on top of several projects he was working on.

The first order of business was to visit all the homes I lived in and schools I went to during my childhood, teen and college years. He'd seen much of this in the past, however, he was very young and I figured he didn't recall much of it. Since this is half of his roots, I wanted him to get a good feel for where his father came from and the formative years that were the foundation of who I became.

From this point on, the rest of this post is going to be a series of photos with short descriptive captions. It won't include the homes and schools since those have either already appeared in earlier posts or will appear in future posts. But, there are, what I think interesting photos of things we did during the three and a half days we had together before I had to drive him back to Hartford, Connecticut to catch his flight back to Los Angeles, his new home as of about a year and a half ago.

This was a great visit with my son. It was the best Father's Day I've had in close to two decades because I actually spent time with Pete. Of course, he had to leave early on the morning on Father's Day, but hey, I got three and a half days him.

Being able to take him back to my roots again, at a time when he'll be able to remember and recognize the impact this made on me as to who I became and ultimately on who he is and who he became was priceless to me.

It is and was sad to see the destruction wrought by Sandy on my childhood memories of the Jersey Shore, yet, the resilience of the people was most encouraging and inspiring. Unfortunately, I don't have much positive to say about Atlantic City. I'm a capitalist and entrepreneur through and through. But, the fact is that "not all that glitters is not gold." I am not a fan of unbridled greed and corruption. I little guilt motivated people to move forward and achieve great things for a variety of reasons, but Atlantic City, in my opinion, is an example of failed capitalism and of unbridled greed and corruption. But, it doesn't impact me. I have my memories of the Steel Pier, seeing a couple of the big name "big bands" of the time when they performed there, watching the diving horses at the end of the Steel Pier (which the Humane Society would go berserk over today) and watching Bert Parks on TV as he hosted the Miss America Pageant from the Atlantic City Convention Center. If I never drive on the horrible roads or see the stark contrast between the haves and those in poverty that is so apparent in Atlantic City, it will be fine with me.

As to my hometown or even Winchester, Virginia where I made my home in the region for about 27 years, due to the changes, while on the surface they don't look much different, under the surface, that change that is inevitable, is all too apparent to me. I could never live in Clifton or that region again. It is an alien place to me other than my memories of a time long gone. The same is becoming true of Winchester (and even Annapolis, Maryland where I lived for ten years). There is nothing wrong with any of these places, but the parts of these places that were most attractive to me are now memories of mine and I'm content to live with that.

A singer/songwriter in his mid 30's, I'd guess, came into our small recording studio in the Washington, DC suburbs about 40 years ago. He later moved to Nashville where I assume he had a successful songwriting career. One of my former recording engineers found his obituary a couple years ago and sent it to me. But, this songwriter, like so many songwriters was a philosopher of sorts. The title of the song we recorded was "Stranger in my Hometown." I found the original master tape a couple years ago and I believe I transferred it to a digital version. The words absolutely ring true to me and one day in the future I'll put his song here on the blog. I'm sure, if you're currently living free or aspire to live free, this song will be as meaningful to you as it is to me.
Posted by Ed Helvey at 1:08 PM