California, Here I Am!

Yes, I am in sunny, warm (finally) southern California. But, not without challenges getting here. I'll recap the travels in another post devoted just to the mostly uneventful trip other than my eight day stay in Cherokee Village, Arkansas. But, this is the view from where I am composing this article today. 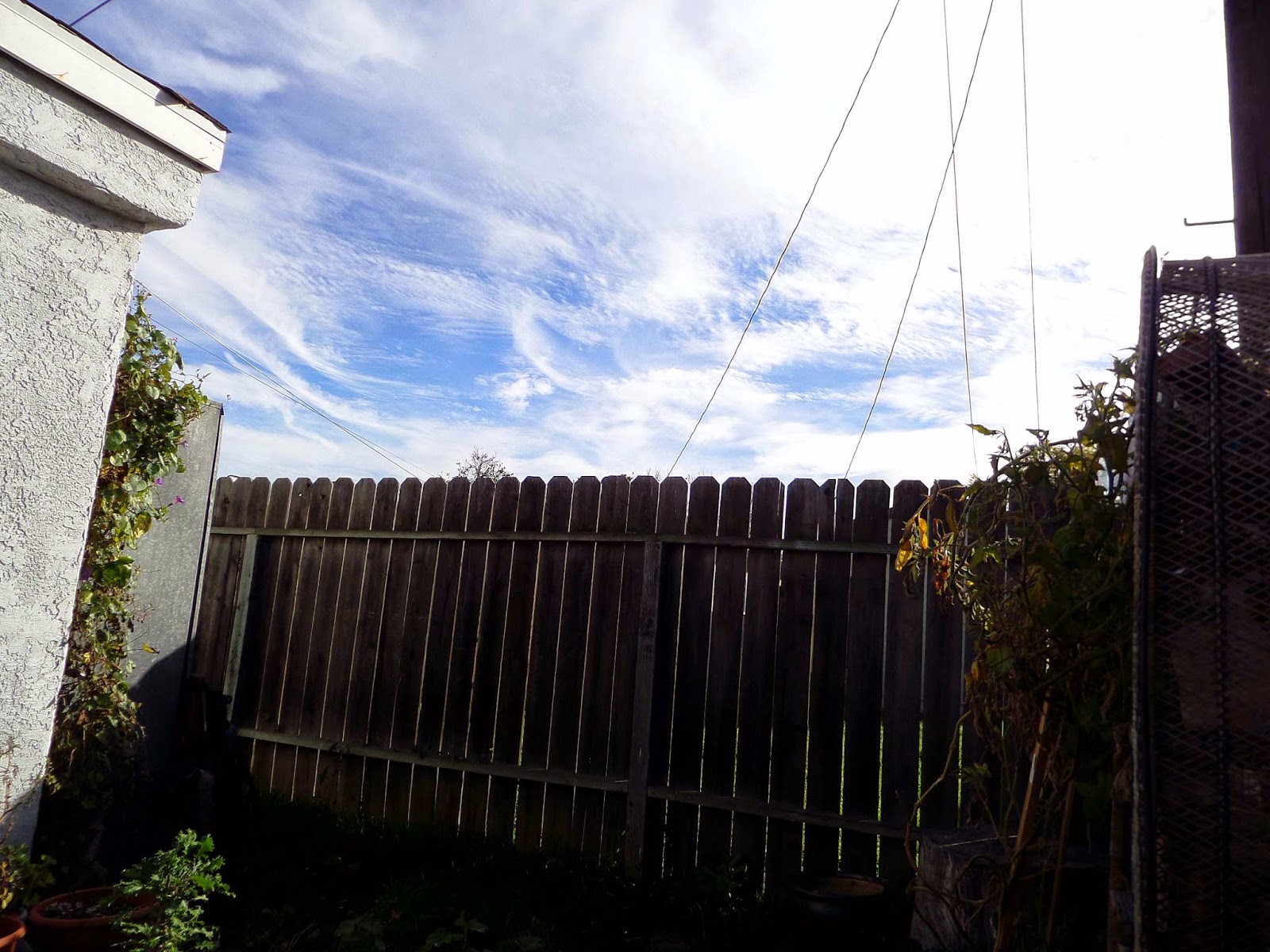 This is from the small yard, but adequate for my son, Pete's, (and currently, my) needs in the city of Hawthorne, California, one of the cities that makes up what most people call Los Angeles, the "City of Angels." His small house is actually a guest house located behind the small main house that faces the street. It's actually very quiet and secluded back here. I can't see anyone and no one can see me.

Now, lest I lead you to believe my son lives in some palatial compound, the reality is that his little accommodation is not in great repair, is very Spartan and quite small. But, the rent is extremely reasonable, includes all utilities and serves his purposes quite adequately for the moment.

My son is a member of what is termed Generation X while his father is part of the Silent Generation, the generation immediately preceding the Baby Boomer Generation. So, he and I have somewhat different world views and, yet, we share many of the same values.

I find it most interesting that while I was born only a year before the "official" beginning of the Baby Boomer Generation, I, for all practical intents and purposes, grew up as a Baby Boomer. My father, would also be considered a member of the Silent Generation though he was born one year prior to that generation and would be considered part of the Greatest Generation, but I share most of his values. I found this all quite interesting as I did some research on the generations for this article.

The thing I find most interesting is that my father (parents) grew up during the Great Depression. This was a time when a large part of the U.S. population lived frugally and without large accumulations of material "stuff." However, he did his level best to make our lives (my two sisters and mine) much better. We lived what would have to be considered something just north of a solid Middle Class lifestyle. Nice homes, two, then three cars, a couple TV's, eventually, we had multiple bathrooms and each of us kids had our own bedrooms. And, of course, there was quite a bit more "stuff" that accumulated.

My son grew up in what would be considered a solid Middle Class lifestyle. Larger homes, multiple bathrooms, extra bedrooms, multiple vehicles and too much stuff. It took me way too many years to realize the folly of bigger homes, multiple vehicles and the accumulation of way too much stuff. Of course, I couldn't imagine how stressful it would be to have to downsize, economize and live simply. It's an ongoing process, but I'm now an advocate of this lifestyle and have no desire to return to the excesses of my earlier life.

Where Did I Go Right? (But, I Really Don't Take The Credit)

The really interesting thing to me is that my son, a member of a generation that became even more self-indulgent, has actually embraced minimalism, frugality and simplicity since he left the nest. Believe me when I say that as an only son, who grew up in an entrepreneurial Middle Class, Baby Boomer home, he was doted on and spoiled. Yet, somehow he found the pathway to greater freedom and happiness at the onset of his adult life rather than dauntingly going through 40 or 50 years of excess and the accumulation of massive amounts of "stuff."

So, as I sit here at his modest abode, I marvel at this interesting circumstance. I guess it wouldn't hurt to elaborate a bit by saying he lives his frugal, minimalist, simple lifestyle by choice. He is a self-made man in his mid 30's. He is currently employed (his first full-time employment in about 10 years) by a division of one of the Big Five international accounting and consulting firms. He earned his stripes as a contractor for some of the largest high-tech and e-commerce businesses in the world over the past decade.

He earns a healthy, six figure (before the decimal point) income with an enviable benefit package. The other people he works with choose to live in high cost housing, drive Bimmers, Benzes and other, so-called, Yuppie cars, shop in the trendy upscale stores, wear the latest fashions, travel high on the hog, etc. He sees this income as his opportunity to create his future freedom. By choosing to live simply, minimally and economically now, he will be able to be free to travel the world and work on his own terms in the not too distant future. He's already a world trekker and has been for years. 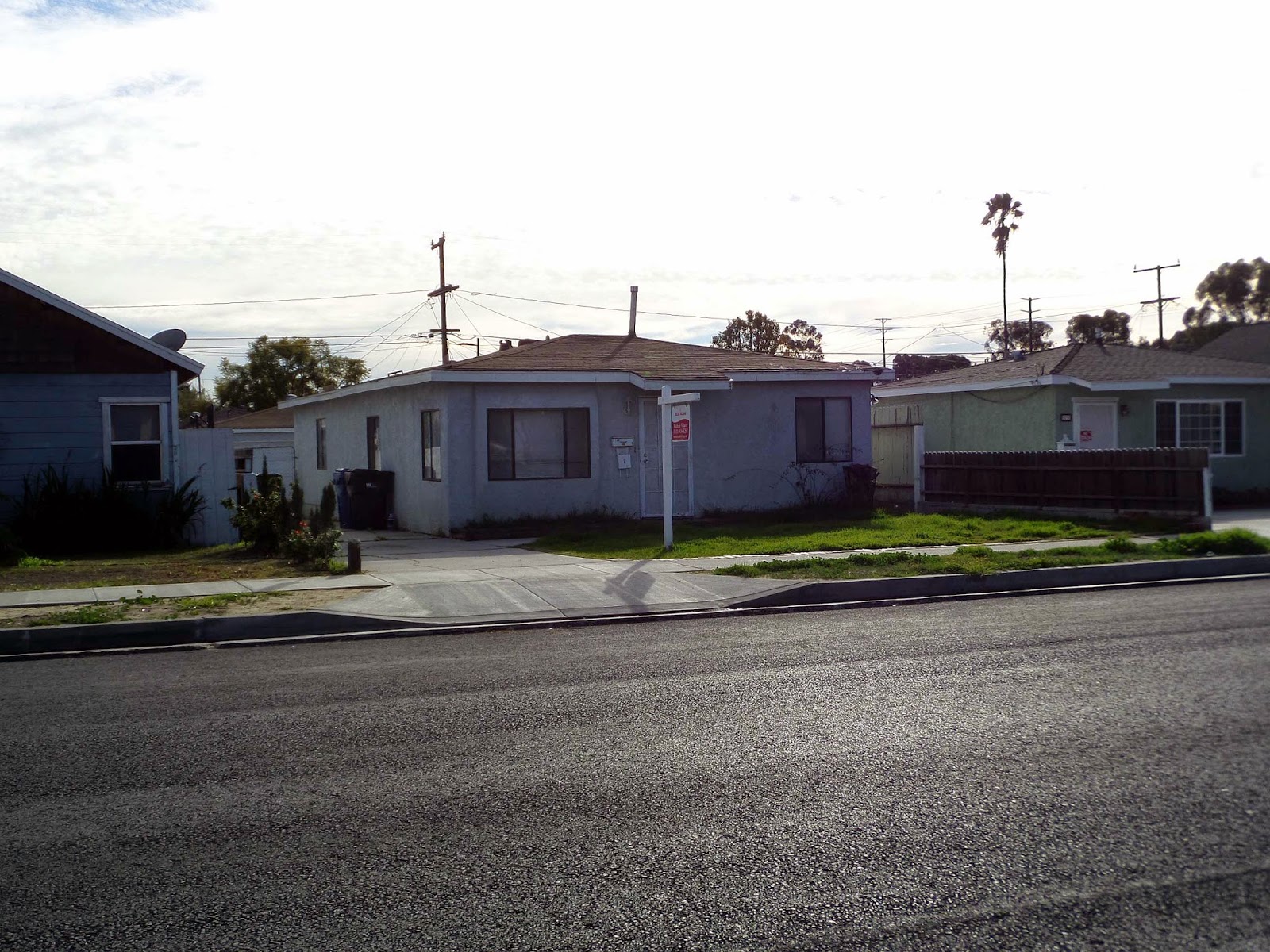 The main house, the guest house and the property are all for sale (short sale), so he may have to leave here soon. But, he figures he'll stay here as long as he can while keeping his eyes open for another similar housing opportunity to make a move to when this property sells. 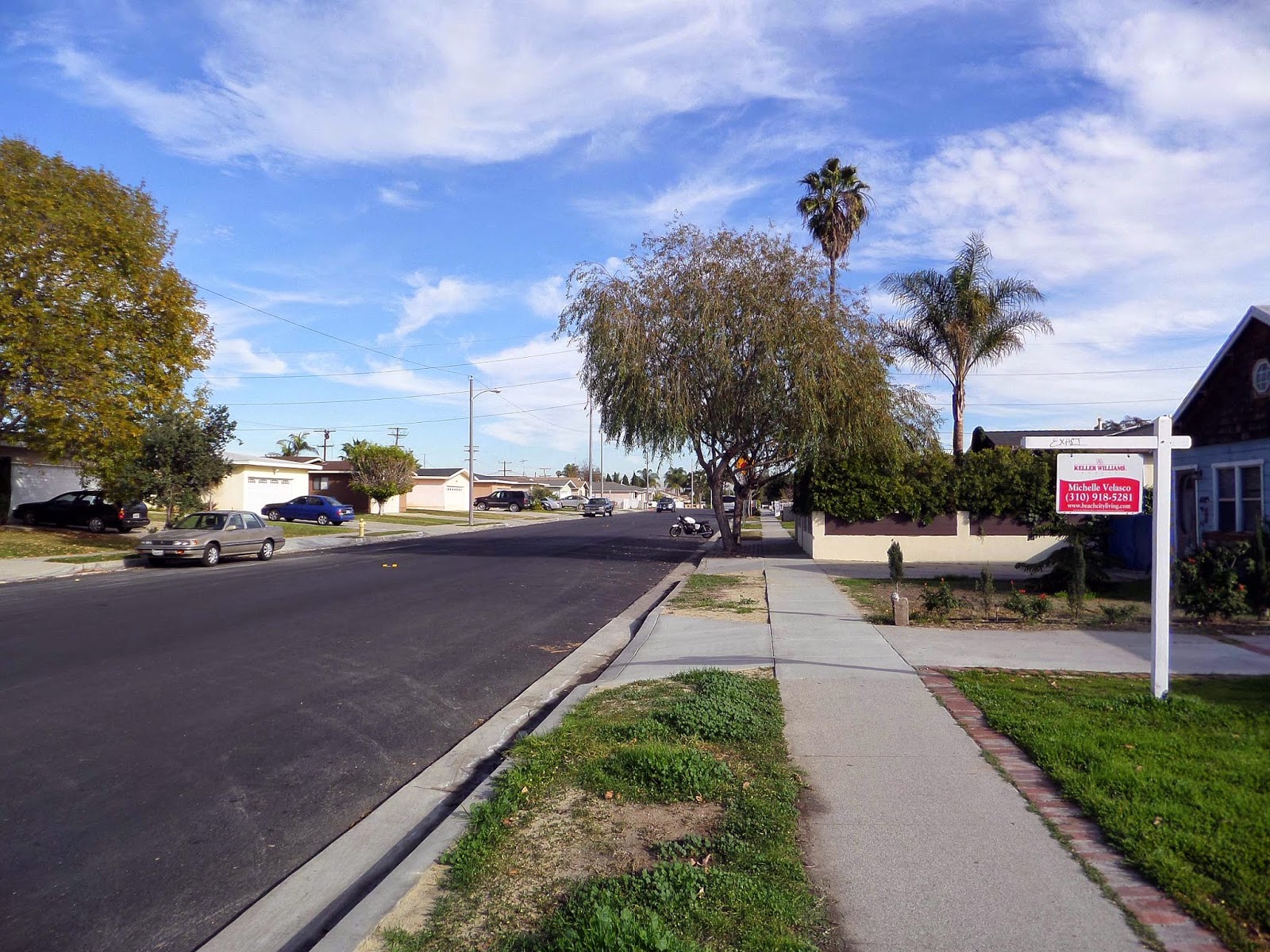 Above is a view of the front of the main house and to the right and below are views up and down the street. As you can see, he's only a half block from the I-405 (The 405) Freeway and he's pretty close to the Los Angeles International Airport (LAX), yet, it's amazingly quiet in his small, secluded domain. 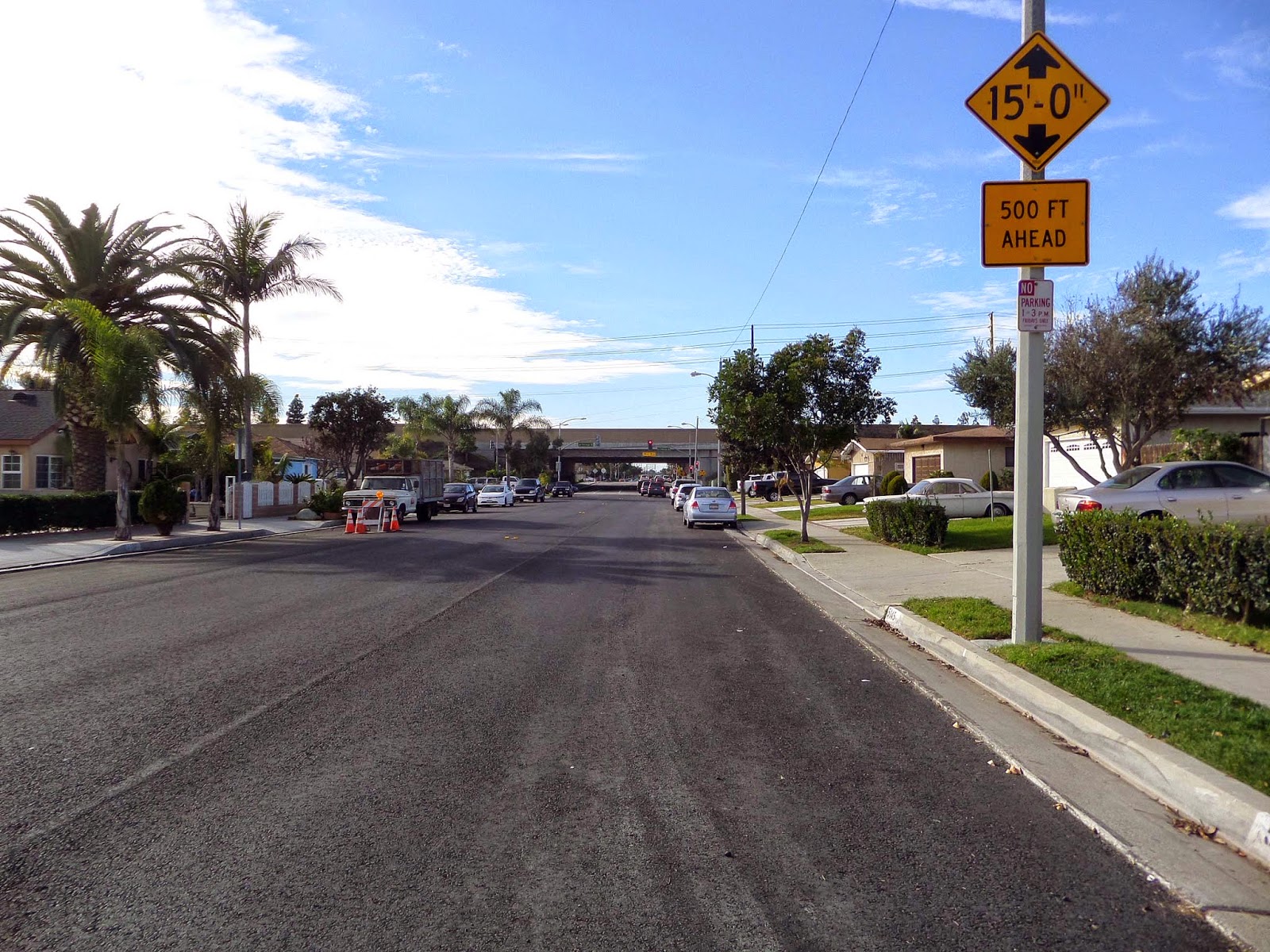 While this small place could be considered a larger "Tiny House," other than a few features of the floor plan, I would find this small place very accommodating at some time in the future when it will be time to ultimately hang up my keys. I'm not figuring on that occurrence until somewhere after age 100.

Meanwhile, My McVansion, my micro-condo on wheels, is located about 2 miles from my son's pad with a large vacant space where the engine usually resides. It's at an engine rebuilding shop that comes with very high reviews. Unfortunately, after making it 3,233 miles across the U.S. from my departure point of Keyser, West Virginia to 2,500 feet up the extremely steep climb to the 4,160 foot Tejon Pass out of the San Joaquin Valley to the San Fernando Valley, the poor little engine that could . . . just couldn't anymore and had a "heart attack." It's beyond bypass surgery, it needs a complete rebuilt heart.

So, I had to limp the final 84 miles to my son's place with a barely functional engine. I finally made it over the 4,160 foot pass and the rest of the way by driving on the shoulder (fortunately, pretty wide) with my emergency flashers on, often at speeds of only 10 to 15 miles per hour.

Of course, there was one other delay of about an hour and a half when the brand new, right rear tire ended up flat. Fortunately, it happened at a wide place off to the side of the 405 Freeway just 15 miles from my son's house. The new tires were installed at the Walmart in Clovis, CA the day before my "trip from Hell" and only had about 200 miles on them. My AAA Plus membership took care of getting the tire changed. Again, fortunately, I had the spare checked the day before and had it filled when we found the tire pressure was nearly zero.

So, after the engine is replaced, I'll be heading to the Walmart in Torrance, California to have the tire repaired (if repairable) or replaced if it isn't. Once more, fortunately, I had the foresight to take the road hazard warranty.

Thus, by circumstance, I have the good fortune to be able to spend more time visiting with my son (when he's not at his office about a mile and a half from his home). Since we have been residing on opposite coasts for the past eleven years, we don't have this opportunity very often. I would have much rather enjoyed this visit by choice. Regardless, it still provides me with an opportunity to enjoy his company and learn about and explore his world. But, this is the scary part. I'm finding out how much more alike we've become as he's matured into a sharp, young professional.

I consider myself lucky. I don't know what I did to deserve having such a great kid. I'm sure I made all kinds of mistakes as a father. It's a big credit to him that he still figured it out and is living his life productively, freer than most people his age and, apparently pretty happily.

Living life free and happy is great. There will always be challenges along the highways and byways of the journey and some may certainly be difficult. But, attitude goes a long way to overcoming any challenge thrown your way.

I'll be leaving a few days later than I planned for Quartzite, Arizona to attend Bob Wells' "Rubber Tramp Rendezvous" (RTR). But, I will get there and that's the important thing. I'm looking forward to meeting up with a bunch of other seasoned and newbie vandwellers and swapping all kinds of war stories.
Posted by Ed Helvey at 9:55 PM